Alex Whitehouse is an American actor, director, writer, producer, social media personality, YouTuber, and TikTok star who is known for having been cast in a couple of acting projects such as The Lerners, Strange Angel, Power Out, and I Love You?. Other than that, he has also flourished as a social media star and has gained more than 500k fans and more than 6.5 million hearts on TikTok, more than 50k followers on Instagram, and more than 5k subscribers on YouTube.

Alex Whitehouse is represented by –

Alex Whitehouse has done endorsement work for a couple of brands such as NFL and Spy Gear.

Moreover, he has also either endorsed or promoted several brands through social media which include the likes of Bollinger Brand, SHADOW HILL, DOPE, and several others.

Alex Whitehouse made his first web show appearance by playing the role of ‘Boy’ in an episode titled Sacrament of the Ancestors of the historical period mystery drama series, Strange Angel in August 2018. The lead cast of the show comprised of actors such as Jack Reynor, Bella Heathcote, Peter Mark Kendall, Rade Šerbedžija, Greg Wise, and Rupert Friend.

He stays fit by working out on a regular basis which is quite evident from his shirtless Instagram pictures. 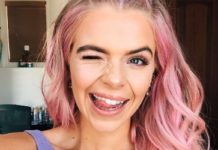