Asa Akira is an American adult film actress and director who is best known for her appearance in more than 500 adult films until May 2016. Besides that, her buxom and shapely brunette features have also helped her win various awards including the “AVN Female Performer of the Year Award.” Asa also has a huge fan base with more than 2 million followers on Instagram and more than 1 million followers on Facebook.

She studied at Manhattan’s United Nations International School. However, she was not called back to attend the school for her Sophomore year due to unsatisfactory grades. As a result of that, she joined Gramercy Park’s Washington Irving High School.

Akira completed her senior year of school at the City-As-School which is situated in 16 Clarkson Street.

Asa is represented by Mark Spiegler of Spiegler Girls.

Asa Akira’s name has been linked with –

Asa Akira is of Japanese descent.

She prefers to think of her sexual orientation as heteroflexibility and dislikes being called bisexual.

Through her social media, she has done endorsement work for various brands such as – 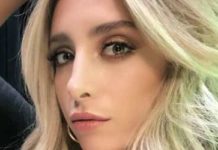