Kelly Bensimon is a really strong woman. She has overcome various obstacles and lived in the scrutiny of the public eye for years. She faced very negative judgment on and after The Real Housewives of New York (2008-Present) but still managed to live life on her own terms. These days, the diva can be seen flaunting her sexiest body ever.

When you look at the pictures, you won’t believe that she is really 49. Here, we try to find about the latest workout routine she tried and how it helped her to get an amazing body. We also find out her thoughts on the skin issue and her daring move of baring it all on Playboy cover in 2010. Keep scrolling to know it all.

The model recently revealed that her go-to workout is now SoulCycle. She does it at least three times every week. She thinks it was a good decision because the workout regime changed her body for the good. Her inspiration for trying this workout was her oldest daughter who started going to SoulCycle classes first. She accompanied her daughter and liked the experience so much that she stuck to it.

The results of adopting SoulCycle have been amazing for her body. Soon after joining the class, she started noticing that everything became more toned than ever before. Previously, her workout routine revolved around running all the time and that workout made her look over worked out. Now, even working out for three days a week has led to great results. She calls SoulCycle to be a game changer.

Mistake Made by Women

The fashion icon thinks that many women make the mistake of exhausting themselves when they are following a workout routine. This leads to making them age quicker than ever before. You should avoid such mistakes and work out only as much as your body needs.

As the stunner looks nearly perfect, people find it hard to believe that she has been a victim of a skin issue for a long time now. She has had psoriasis since she was a kid. She hated it and found it to be very embarrassing.

When she was a teenager, she spent hours in tanning beds so that she could get dark enough to cover the signs of the skin problem. She was quite desperate and thought that she couldn’t look pretty due to the skin trouble. Now, she thinks that no one should try to follow her lead and tan themselves a lot because it’s not healthy at all. A good and healthier alternative to exposing yourself to tanning beds would be these amazing tanning pills by Rio.

Even when she was an adult and started modeling, she felt bad about her skin. Whenever she had a breakout, she wanted to hide from the world. At that time, Playboy magazine asked her to bare it all and the gorgeous woman went for it despite being a bit scared because of psoriasis. But when she took off her clothes and got in front of the camera, she forgot about all her imperfections, itches and flaws. At that moment, Playboy made her realize that she was beautiful and she accepted those flaws. Showing so much helped her to finally stop being judgmental.

Hoping for a Repeat

As the Playboy magazine experience has helped her to know herself better, it’ not a shocker to realize that she wants to do it again. She did the cover in 2010 and she feels that she looks better now. If she is asked to do it again, she would like to prove that one can look good at any age. 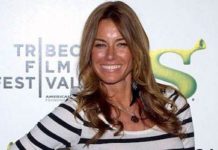