Neta Alchimister is an Israeli model, swimwear designer, TV star, and social media personality who is known for her immense popularity on social media. According to the Israeli Internet Association, Neta Alchimister has been the 3rd most influential Instagram star after Bar Refaeli and Anna Zak as well as the 3rd most followed Israeli celebrity on social media after Gal Gadot and Bar Refaeli. She has also worked with several popular artists from the entertainment industry such as the Colombian singer-songwriter and rapper, Maluma. Neta Alchimister started working as the lead model for Castro, a clothing brand, in the year 2015 and has also worked with many other well-known brands and designers. She co-founded her own swimwear line, BaNaNhot, with her friend and model, Noa Beny. Neta Alchimister has also appeared in a variety of shows such as Ofira & Berkovic, Hayom BaLayla, Machar Shabat, Naor’s Friends, and Mo’adon Layla. Moreover, she has accumulated a huge social media fan base with her amazing pictures and enjoys more than 2 million followers on Instagram.

The details related to Neta Alchimister’s educational qualifications are not known.

Neta Alchimister is represented by –

Neta Alchimister has either endorsed or promoted a number of brands which include the likes of Castro, Erroca, BERTA, TFS, Ray-Ban, Retrofête, Jean Paul Gaultier, REVOLVE, and Adidas Originals.

Neta Alchimister made her first TV show appearance as a guest in an episode of the comedy talk-show series, Hayom BaLayla, in February 2017.

Neta Alchimister stays fit by working out on a regular basis. She goes to the gym and works out with her trainer to maintain an enviable as well as a healthy physique. She usually indulges in exercises such as kickbacks, deadlifts, and lunges while she also works out her core regularly.

After a long vacation it’s good to be back home again ?? with @eranhagag123 @adidasisrael 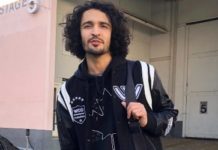