In current scenario, the top sports teams have conquered new horizons and have become much more than just a sports team. They have become huge brands. The top teams in sports professional leagues have become massive businesses that have the ability to churn out revenues, which would put top corporate houses to shame. The contests between the best athletes are shown all over the world, which helps clubs to bring in millions for the media rights.

The gate receipts, kit sponsors, stadium naming rights, prize money from top competitions and merchandise revenue has made the teams richer than ever. However, the modern teams also spend millions to maintain their dominance. They pay exorbitant salaries to the players who are tasked with providing best sporting results, which would further enhance the popularity of the teams.

The list released by Sporting Intelligence shows the top paying sports teams of 2015. And, unsurprisingly, the list is dominated by the football teams. In the top twelve, there are eight football teams, while three come from baseball and one from basketball. Here, are the top ten best paying sporting teams in the world.

(Please note that the average annual pay means the total wage bill divided by the number of players.)

Under manager Arsene Wenger, the London club has become one of the most successful and famous English clubs in the premier league era. Including, this year’s FA cup final victory, in which they completely outplayed Aston Villa, they have won record 12 FA cups. In fact, Wenger, by leading his side to sixth FA cup victory became the most successful manager in the cup history. The club’s attractive and fluid style of play has made them an immensely loved team. Also, much of their cult popularity is due to their 2003-04 invincible season, in which they won the league title without having lost a single match. The club’s leading players in that era including Thierry Henry, Robert Pires, Patrick Vieira and Freddie Ljungberg were global superstars.

The Bronx based baseball team is arguably one of the most popular baseball teams. And, their immense and sustained success goes long way in establishing their popularity. They have won 18 division titles, 40 AL pennants, and 27 World Series championships, all of which are MLB records. Also, with the estimated value of approximately $2.3 billion, it is the highest valued sports franchise in the United States and 4th in the world. Their $2.3 billion Yankee Stadium that was opened in 2009, is the most expensive stadium ever built. However, over the past few years, the team has failed to replicate the immense success, they have enjoyed historically. Their last World Series title came back in 2009. However, last season, they did show promise and put in a strong performance. Maybe, in coming years, they will be back to their best.

On eighth spot, we have the reigning English Premier League champions who were in a dominant form last season. The club owner Roman Abramovich would be very happy that his beloved club has only the third highest wage bill in the league, but is still capable of winning the league with such ease. It is not that money is an issue for Roman. After acquiring the London based club in 2003 for £140 million, he has pumped more than one billion pounds in the club to make it an established force in the league, the fact that rival fans love reminding Chelsea supporters. However, over the years, the club is making profit, with their highest ever profit of £18.4 million came in 2014. Playmaker Eden Hazard, who was named as the player of the year for the recent season is the highest paid player at the club. He is reported to earn £200,000 per week. The second highest is Spanish striker Diego Costa, who earns £185,000 per week.

The Bavarian giants are the most successful team in Germany. They have won record 25 national titles and 17 national cups. Also, with ten European Cup/UEFA Champions League finals appearances, they are one of the most successful clubs in Europe. After Portuguese club S.L. Benfica, they are the second-biggest club in the world in membership terms, with over 251,000 members. On field, they are irresistible and stylish as ever. In the last three years, they have won many league titles, two national cups and UEFA Champions League.

Bayern Munich is the sole German club in this list. But, with revenue amounting to more than 500 million dollars, they don’t have any problem in paying high salaries. The highest paid players at the club are Arjen Robben, Robert Lewandowski, Philipp Lahm and Franck Ribéry. All four are rumored to earn €160,000.

Without any doubt, Manchester United is the most successful English club with record 20 league titles. Also, they are the only English club to have completed the historical treble. Their other trophy haul includes 11 FA Cups, four League Cups, a record 20 FA Community Shields and three European Cups. Currently, the club is in rebuilding phase after a long time and immensely successful manager Sir Alex Ferguson retired two seasons ago. Last season, under the guidance of Louis Van Gaal, the club spent around $150 million to return to their former successful years. They were partially successful as the club qualified for the Champions League. And, this summer, the club is once again poised to spend heavily to get team ready for the major titles.

The highest paid player at the club is team captain, Wayne Rooney, who earns reported £300,000 per week. The second highest player at the club was Radamel Falcao, who earned £280,000. However, he won’t be on the club’s wage bill any longer as the club has decided against making his loan move permanent.

Though, they don’t have huge trophy haul as the other baseball teams on our list, but they still hold some of the most prestigious records in the history of the championship. The team has produced 12 Rookie of the Year Award winners, including four consecutive from 1979 to 1982 and five consecutive from 1992 to 1996. These are the longest consecutive streaks in the history of Major League Baseball. This year, no other MLB team has spent on player salaries as much as Dodgers. However, Dodgers, with their stream of regular and huge revenues shouldn’t have any problem covering salaries. They are in middle of a media rights deal that could earn the club over $7 billion over a period of 25 years.

The Catalan side is acclaimed by many as the best team of the decade. Over the last decade, the club has won unprecedented four UEFA Champions league titles, the two of which came during the treble winning seasons. Under former player Pep Guardiola, the club won astonishing fourteen titles in space of four years. The club won three league titles and two UEFA champions league titles in that duration. Led by the genius Lionel Messi, the team has won over fans, all over the globe with their breathtaking and mesmerizing style of play. So, it is only logical that the diminutive Argentine should be their highest paid player. The four time Ballon d’Or winner is paid £256,000 per week after tax. The second highest paid player is Luis Suarez, who played a key role in club’s recent treble success. And, on third spot is the third member of the much vaunted attacking line, Neymar with £150,000. The club legends, Andrés Iniesta and Xavi also earn the same amount.

Since, purchasing the club in 2008, Sheikh Mansour bin Zayed Al Nahyan has pumped an enormous amount of capital in the club to make it successful. And, it has been partly successful as the club has won two league titles in the last five years. But, it is Europe where the club has regularly floundered and has embarrassingly failed again and again. Last year, due to their extravagant spending and failing to balance the book, the club was sanctioned under UEFA’s new financial fair play regime. The club was slapped with €60 million fine and was asked to limit their spending to €49 million for 2014 season. However, the club administration is looking to improve the squad this summer by spending more than $150 million to buy Paul Pogba, Raheem Sterling, and Kevin De Bruyne.

Real Madrid is the most successful team in the European competition. They have won UEFA Champions League title ten times, the last of which came a year ago after a victory over cross-city rivals Atletico Madrid in the final. The club has also won record 32 league titles and 19 Copa del Rey titles. They also hold the distinction of being the most valuable sports team in the world, worth €2.5 billion ($3.4 billion) and the world’s richest football club, with an annual revenue of €549.5 million. However, the last season was less than ideal for the club. By January, they were on course to win all trophies. However, the season ended with zero trophy haul. The club has sacked Carlo Ancelotti and hired Rafa Benitez to guide the club to trophies next season.

Unsurprisingly, Cristiano Ronaldo is the highest paid player at the club. He takes home £288,000 per week after tax. He is followed by Gareth Bale on second spot with £256,000 per week wage.

Paris Saint-Germain had won just two league titles before Qatar Sports Investments became the majority owner of the club. And, since their acquisition, the club has won three consecutive league titles. Last season, they won the domestic treble. The club owners have invested immense capital to get the club to this level at which it can count itself amongst the best clubs in the world. And, do not be surprised if the capital cub manages to make a deep run in UEFA Champions League or maybe even win the competition in the near future. In fact, the club administration is looking to undertake another high spending summer to make club strong enough to stand up to the leading European sides such as Barcelona and Real Madrid.

The enigmatic Swedish striker, Zlatan Ibrahimovic with €262,500 per week salary is the highest paid player at the club. Whereas, his strike partner Edinson Cavani earns £160,000 per week. 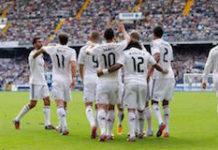