Tracy Anderson went to the American Musical and Dramatic Academy in New York City. There, she studied musical theatre for two years.

Apart from the promotion of her own products and DVDs, Tracy hasn’t done endorsement work for any brand nor has appeared in any TV commercial.

Her first credited appearance in the film was in the superhero flick, Iron Man 2, in which she served as a personal trainer of her close friend Gwyneth Paltrow’s character.

In October 2012, Tracy made her first TV show appearance as herself on the news talk show, Today.

For the cardio, her preferred choice is dancing. However, she doesn’t mind going with jogging or aerobics. She doesn’t like indoor cycling. If she has to cycle, she prefers to head outdoors.

For the muscular work, she relies on dynamic waving arms at every angle possible. It also involves lifting the very light weight over high repetitions. However, instead of focusing on bigger muscles, she focuses on smaller, stabilizing muscles. Also, she is not a fan of some traditional core exercises such as crunches and sit-ups.

As per her diet, she prefers to keep it simple. She also allows herself to indulge every once in a while. She likes to start her day with a wellness shake, which counts kale, banana amongst ingredients.

For lunch, she likes to have quesadillas with cheese. However, as she is allergic to gluten, she goes for organic corn tortillas and for cheese, she likes organic cheddar cheese.

Flounder is her choice for dinner. It is a light fish dish served over creamy mashed potatoes and along with sautéed Brussel sprouts. She takes care of her hunger pangs with organic chocolate. 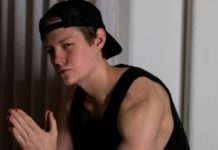