Audrey Marie Anderson is an American actress and model. She began her career as a model in the early 1990s and was featured in advertisements for big brands such as Gap, Armani, Target, American Eagle Outfitters, and Biotherm. Audrey then moved into the movie industry when she got a recurring role in the ABC drama series Once and Again (2000-2001). She is very popular and widely known for her role as Kim Brown on the CBS series The Unit that aired for 3 years (2006-2009). Audrey then had roles in television series Still Life and Going to California. She has guest starred in shows such as Without a Trace, NCIS: Los Angeles (2010), Private Practice (2012), and House (2012). Other movies she has acted in include Drop Dead Sexy (2005), Moonlight Mile (2002), and Least Among Saints(2012).

Audrey got recurring roles as Lyla Michaels in the Arrowverse which sometimes involves her coming on The Flash (2016) and Supergirl, television series produced by the same people. But she is mostly seen on Arrow (2013). Audrey also portrays Lilly Chambler on The Walking Dead (2014). She has worked with notable directors such as David Mamet, Lisa Cholodenko, and Antoine Fuqua. She has been getting more roles, mostly on television series such as Castle (2015), Minority Report (2015), and Mad Dogs (2016).

Audrey Marie Anderson is represented by –

Audrey Marie Anderson made her first theatrical film appearance as a teenage waitress
in the movie The Badge in 2002.

Audrey Marie Anderson made her first TV show appearance as an officer on the TV series Beverly Hills, 90210 in 1994.

Audrey has never shared an exact workout routine she follows, but she is in a very great shape which indicates that she has a great diet plan and carries out exercises to ensure she doesn’t go out of shape. Therefore, she may or may not have a personal trainer. 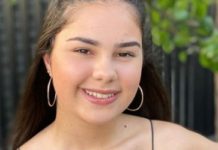