Fat Burning Bodyweight Workout: Look like a Jacked Rapper or get Fighter Fit with this Circuit 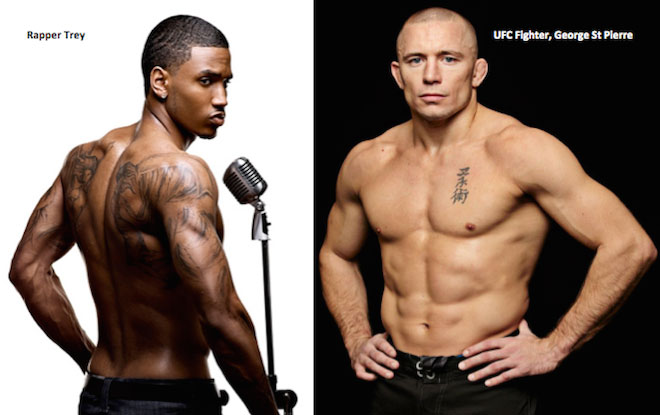 Those who think that a sharp, performance driven, muscular body is possible only in the confines of a posh gym under the strict supervision of a personal trainer need to reconsider their approach to fitness. Nothing measures up to a tough body weight challenge to stay honest with ourselves. If you are ready to expose your weaknesses and truly measure if your fitness is improving or waning, then we have a challenge ready for you to try. Bodyweight drills are often the go to source for high-intensity cardio for action stars, rappers, fighters, and boxers to look fiercely cut and conditioned.

In his song, “Na Na”, rapper Trey displays his affinity for compound movements to build strength and endurance. For upper body strength, he claims to depend largely upon traditional push-ups, clap push-ups, Hindu push-ups, and handstand push-ups.

On the other hand, UFC fighter, George St Pierre and fitness expert Erik Owings, reinforce the fact that there can be no dearth of variety in training using merely your body weight. They have put together a series of movements borrowed from martial arts, yoga, boot camp and plyometrics to get you fighting fit in an eight-week program released in a home workout DVD called Rushfit. They insist that an optional pair of dumbbells is all the equipment one needs to increase the intensity of their workouts.

So no gym? No problem.

Anytime you find yourself without access to a gym but are still craving a quick, rigorous workout then perform the following circuit 3-4 times.

Do as many repetitions as you can for each exercise in 40 seconds followed by 20 seconds of rest before you move on to the next exercise. You may rest for 2-5 minutes in between circuits. 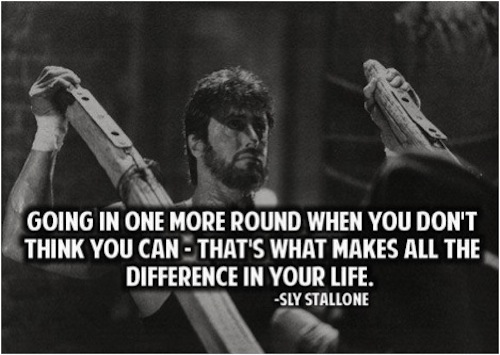 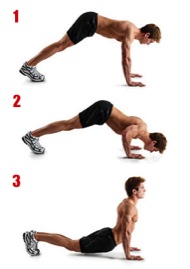 Also called “Dand Baithak” in India, they were a fundamental move in the training regimes of famous Indian grapplers like the great Gama and Dara Singh, to build remarkable endurance and strength that helped them last through and win formidable wrestling bouts.

When executed properly with deep breathing, the Hindu push up will not only enhance your lung power and build strong shoulders, chest and triceps but also create greater flexibility in your lower back, hips, and hamstrings. It is the ultimate power move, which challenges every dimension of the body!

How to perform: The Hindu push up starts in a downward dog position with your legs wider than shoulder width apart. Lower your upper body towards the ground by bending your elbows without disturbing the alignment in your legs. Run your nose, chest, and hips across the floor exactly in that order, until you reach the upward dog position. Push your body back into downward dog position all over again and repeat.

The following video provides a clear demonstration of a well-performed Hindu push up:

One of the favorite abdominal moves in the arsenal of celebrity trainer, Ashley Conrad, she frequently used this exercise with added resistance performed till muscle failure to help Bradley Cooper get ripped abs for the movie, “The A-team.”

How to perform: Lie down flat on the floor with your toes pointed towards the ceiling and arms stretched above the head. Simultaneously raise your feet and arms off the floor until your legs reach a 45-90 degree angle and your arms are directly over your belly button. Your shoulders should also be off the floor at this point. Slowly return to starting position, maintaining continuous tension and then repeat.

The following video warns against using momentum while performing a typical V-up and suggests possible variations to increase the intensity of this exercise. 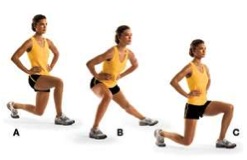 Jason Walsh, Jessica Biel’s trainer told Glamour magazine that walking lunges and multi-directional lunges are the main moves in her leg routine to keep her butt in prime shape. Multi directional lunges are also a great warm up before a long, outdoor run. When done explosively, they serve as a great conditioning drill to prepare for sports like hockey and tennis, which demand a lot of hustling in different directions. 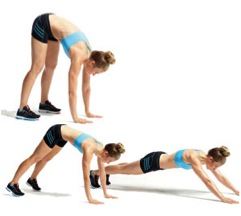 Unlike popular exercises like sit-ups and leg raises, this move does not just work your abs in isolation; it challenges your entire core including the deepest muscles, the transversus abdominis. A strong core helps you stabilize your body weight a lot more efficiently and takes the load off all the other muscle groups, making way for more skilled, agile and pain-free movement patterns in the body.

As reported in GQ magazine, celebrity trainer, Ron “Boss” Everline, often uses inchworms in the dynamic warm up circuits of R&B hit maker, Ne-Yo’s typical morning workouts to activate his core before making him perform mini-circuits of compound exercises. This approach, Everline, claims is ideal to maintain a lean look with a busy schedule.

How to perform: Stand with your feet hip-width apart. Hinge forward from the hips and walk your hands forward in front of your body into a push-up position while keeping your abs tight and legs straight (but not locked). Try to extend your hands further away from your shoulders for greater intensity and hold for as many seconds as you can, before walking right back into starting position.

For greater understanding, watch the exercise demonstrated in the following video. 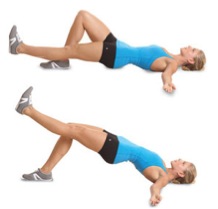 Despite ensuring occasional exercise, most of us sit too much, for far too long. This leads to tight hip flexors, weak hips, and hamstring muscles to create the dreadful belly pooch over time. An exercise to counter this problem would be the single leg hip extension. Extending the hips, one leg at a time creates greater instability to provide a deeper challenge to the hips, hamstrings and the core, thus generating greater carry over benefits to motions that involve running, jumping, throwing or tackling.

Since Hollywood actors need to maintain a great posterior and a flat stomach; this move comes highly recommended by Joe Dowdell, who has trained the likes of Eva Mendes.

Single leg hip extensions are also one of the many favored body weight moves by Rosie Huntington Whiteley, particularly when she is traveling and does not have access to a regular gym.

How to perform: Lie face up on the floor with your arms spread out to the sides. Bend your right leg at the knee while keeping your left leg straight. Raise your left leg until it reaches a 45-degree angle and from there lift your hips off the floor until your body forms a straight line from shoulder to knees. Hold at the top for a couple of seconds before coming back down and then repeat. Finish all your repetitions on one side before switching legs. To ensure correct form, watch the following video. 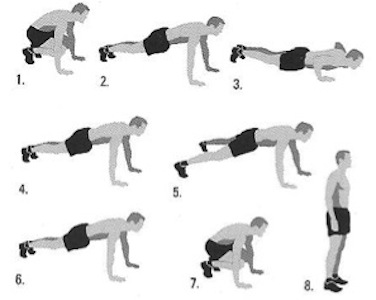 Cameron Diaz’s trainer, Teddy Bass affirms that the best way to generate the greatest after burn from a good workout that does not demand several hours is to fit in a time efficient full body power moves that keep your heart rate up throughout the workout as well as tax all the major muscle groups.

The 8-count bodybuilder is a one-move workout in itself. At the end of a torturous circuit, it will particularly incinerate the fat off your body, leaving your lungs burning and your muscles pumped.

This is also one of the staple moves in the US Navy seal exercise regimes. When Rihanna was preparing for her role in 2012 movie, Battleship, she hired a former navy officer, Jacqueline Carrizosa to help her realistically portray her role as Officer Cora Raikes. When it comes to conditioning, the one move Carrizosa swears by? You guessed it, the infamous 8-count bodybuilder!

How to perform: From standing position squat down towards the floor and thrust your legs out to get into a push-up position. Perform a push up followed by a plank jack in which you jump out with your legs, on either side, at least hip width apart and back. Jump back into squat position and then stand back up. That is one repetition. Repeat.