Hamish Daud is an Australian actor, TV presenter, and architect who is best known for hosting Trans TV’s hit show My Trip My Adventure (2013-2015). He is also noted for starring in several Indonesian films such as Spy in Love (2016), Gangster (2015), Love You… Love You Not (2015), and Supernova (2014). Hamish is also known for working with SAKA Architects since he joined in 2008. He has a huge fan base with more than 2 million followers on Instagram.

Hamish graduated with an Advanced Diploma in Advertising from Macleay College, Surry Hills, Australia. Later, he completed his studies with a Bachelor of Arts in Liberal Arts at the Southern Cross University, Lismore, Australia.

Hamish is managed by Vita Ramona.

Hamish has appeared in several commercials for brands such as –

Through his social media, he has endorsed several brands such as –

Hamish made his feature film debut in the musical adaptation movie Rectoverso in 2013.

He made his first TV show appearance as a host on My Trip My Adventure in 2013.

Hamish’s simple yet playful lifestyle growing up has helped him maintain a lean figure even as he grows older. However, he does go surfing which requires one to have a good balance and a lean physique to maneuver the board in between the waves. 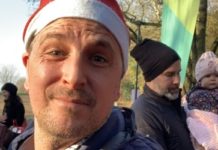