Leem Lubany is an Israeli actress best known for portraying the role of Nadia in the 2013 Oscar-nominated Palestinian drama film, Omar, playing Salima in the 2015 American comedy Rock the Kasbah, and playing an assassin in the Americal crime drama series Condor.

Leem has not dated anyone publicly yet.

She has Palestinian ancestry.

Leem has not done endorsement work for any brand yet.

Leem provided her vocals to some of the tracks of the film Rock the Kasbah (2015). The songs include Trouble, Wild World, and Peace Train.

Leem made her theatrical film debut in Omar as Nadia in 2013.

She made her first TV show appearance in Today as herself in 2015.

As per an Instagram post in 2014, Leem was working out on a regular basis. Her workout routine included exercising in the gym as well as going for a run outdoors. 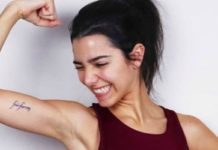