Michael Strahan is a very busy man but he doesn’t take his fitness for granted. He follows the 80:20 rule of dieting very strictly, works out regularly and gives himself some space to enjoy an occasional ice cream or chocolate. The footballer turned TV personality has recently shared his summer fitness ideas and his approach towards cooking fresh foods too. Let’s have a look at what all he does that makes him fitter and happier during summers.

While talking to AOL, the great looking man shared that his workout routine doesn’t change much during summers. As he is often seen on the beach to avoid the heat and he goes there without a shirt, he adds a few extra core exercises so that he can look great when he is topless. He also likes to indulge in unhealthy but amazing foods like ice creams during the summers to beat the heat. His favorite is vanilla ice cream.

The favorite summer workouts of the retired American football defensive are pool workouts. When he was playing, he used to spend a lot of time in the pool because he believes it takes pressure off of a person’s joints. He also loves spending quality time with his kids in the pool. He throws the boys into the pool and calls it an exercise that resembles the shoulder presses. He is a big fan of summer workouts as they allow him to go outside. He also often goes to the park for exercises.

The TV star is not a big runner, he prefers walking to running. He often walks after dinner and makes use of the pull-up bars in the park and trails. He believes that sleeping just after food is not a good idea so he walks after the dinner for up to an hour. It helps him sleep better.

The diet secrets of the co-host of Live! with Kelly and Michael (1983-Present) are very simple. He follows the famous 80:20 rule. He eats clean 80 percent of the times but indulges in vices like Peanut M&Ms during the remaining 20 percent of the times. He thinks that the 80:20 diet is part of his lifestyle and it’s even just the way he lives. He also opines that there is no point in working out so much if you can’t even enjoy a treat at the end of the day.

Making healthy choices is another vital thing for the hot looking dude. He has let go of his addiction for coffee by switching it with green tea and protein shakes.

Michael likes to have egg whites, Ezekiel bread, and turkey bacon in breakfast. He has switched the wonder bread with Ezekiel bread and it was a hard change but he now loves Ezekiel bread too. He also loves having oatmeal in breakfast and drinks a lot of water.

Apart from ice cream and Peanut M&M’s, the sports celebrity also likes to indulge in dark chocolate. He thinks that it’s a healthier option than ice cream and so he has switched to it.

The Houston-born likes to work out regularly no matter where he is. Earlier, he used to workout less when he was traveling, but now, he has committed himself to it. He works out in a hotel gym when he is traveling. Whenever he has to go on a trip, he packs more workout clothes than normal clothes. He also makes healthy eating choices when he is on the road. He tries to avoid making simple mistakes like going in for a burger or having unhealthy stuff like extra butter when he is on the road.

Diet as a Footballer

Strahan also shared the diet he used to have as a professional footballer. He had a bigger body back then and to maintain a big body, he used to eat a lot of foods even junk food, and sweets. The result of the poor diet was that he didn’t have much energy and felt lethargic very often. He used to eat a lot of pizza and blamed it on the job too. When he quit, he worked hard to completely change all his diet habits.

The former member of New York Giants of the National Football League (NFL) loves to cook healthy foods by using a grill. He eats at home at least 5 times in a week. He thinks that eating at home allows you to make healthy food choices as you actually put all the ingredients. He loves to grill for himself and his kids whenever he can and calls himself a big grill-aholic.

The weekend diet of the TV host often consists of throwing in some burgers on a grill along with some steak. He playfully says that a bit of steak is not harmful. But we believe he exercises control there too. 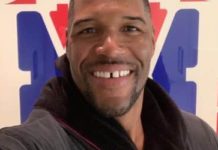