Aaron Philip is an Antiguan-American model, activist, TV personality, author, and artist, best known as the 1st black, transgender, and disabled model signed to Elite Model Management in July 2018 which was publicly announced in early September 2018. She was signed following a November 2017 post on Twitter that stated: “honestly when I get scouted/discovered by a modeling agency it’s OVER for y’all!” in addition to her repeated efforts to bring awareness to the lack of transgender, black, and disabled models in the industry. Even prior to her signing, starting in 2016, Aaron was featured in various photoshoots, primarily for online fashion retailers. She landed her 1st major magazine cover in the June 2019 issue of Paper magazine and was also on the cover of the IN magazine in the 7th issue (2018-2019).

In addition to the cover, Aaron was also interviewed by Naomi Campbell for Paper magazine, who is also a well-known model of color that has worked with Elite Model Management. Aaron also made her runway debut for the WillieNorris Workshop runway show in mid-June 2019, a month after her TV debut in the TBS series Full Frontal with Samantha Bee. Additionally, she had a guest role in the music video for the song Mother’s Daughter sang by Miley Cyrus in 2019. She was also featured in the I-D, Dazed, ELLE, Allure, and V magazines, as well as online publications such as Refinery29 and Now This. She is also the author of the autobiography titled This Kid Can Fly, published in February 2016. Her profile also appeared in The New York Times, promoting her signing as a sure sign of the development of a more diverse industry. Aaron has also amassed a large fanbase online with more than 200k followers on Instagram and more than 100k followers on Twitter.

Aaron graduated high school on June 27, 2019, and was accepted into the Parsons School of Design in New York City, New York, United States.

She is of African-American and Antiguan descent.

Aaron Philip has endorsed brands such as –

Aaron also supported the United We Stand campaign in 2019.

Aaron made her first TV show appearance as ‘Herself’ on the TBS series Full Frontal with Samantha Bee in May 2019, but wasn’t credited for it. 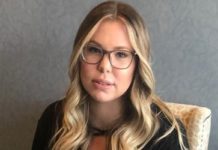