Pleasing personality, Alexander Ludwig, is young and heartthrob actor of Hollywood. While the actors have to work hard to melt weight to groom them for their roles in movies, they at the same time are supposed to gain weight to get fit into other roles.

Alexander’s role in Lone Survivor was of a tough warrior having incredible love and devotion to his country. And due to being skinny, Alexander had a target to bulk up thirty to forty pounds of weight in a very short span of time. Without getting any aid from fitness expert, the young actor successfully attained it through his dedication. After adding thirty pounds, Alexander now has to bring him in his same hot body, which he had prior to gaining weight. 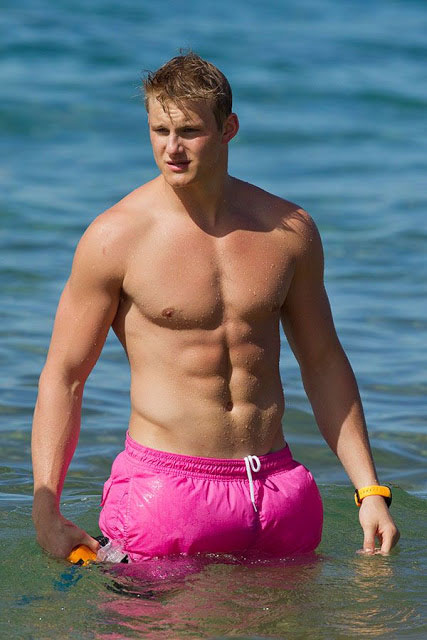 Having flaunted his spectacular and ripped body in shirtless and bare shoots, Alexander undeniably has superb body. Alexander being vigilant about his diet watches what he eats. The star acknowledges that dropping weight is far more difficult than adding on extra pounds.

To bulk up weight, you can freely devour your adored foods. Also, your body has more than sufficient calories to burn, so you don’t have to struggle much. Alexander shares, he ate bountiful protein foods, low carb foods, meat, chicken etc. to put on weight. It was complete leisure time to him.

However, when it comes to shedding weight, you don’t have the privilege to eat your desired foods. What’s even worse is, despite being on low-calorie foods, you are supposed to do full justice to your workouts.

In general, your diet has to be in accord with your workouts to get you gratifying results. Make sure that the foods you gulp down are low in carb, high in proteins, and healthy fats. Reluctance to nourish your body with balanced diet can get you only shoddy outcomes.

Without cutting back the number of calories, you can maintain to have ripped body by being on wholesome diet. Should you don’t see any loss of fat, you can move on by trimming down your daily calorie consumption by 100 in a day. Besides that, you have to be more cautious about the consumption of proteins because protein inevitably is paramount requirement of your body, but you need it in very small quantity only.

Varied roles with diverse body types are what keep the star tuned with industry requirements. He inevitably had to go through several ups and downs for the same. Had it not been grueling workouts, Alexander wouldn’t have been able to fetch radical transformations in his body.

He practiced tough workouts under the supervision of personal trainer to torch pounds for his role in the movie, The Hunger Games. The handsome star practiced workouts such as rope climbing, tire flipping etc. to trigger fat burning process in his body.

He even worked with ex-navy man to learn the intricate details of fighting scenes. Requirement to appear in super chiseled body had him do strenuous workouts, and not to mention, the star didn’t fail to look ripped.

To attain carved body like him, you need to work on your chest and shoulder muscles. Erect and broad shoulders plays imperative role in bestowing you perfect V-shaped body, which is the most sought after masculine body. Ideal macho body has shoulder and waist in the ratio of 1.61:1.

Apart from that, if you are new to workouts, make steady increase in the intensity of workouts. Preferably, begin from less number of reps. Crop up the number of reps, only when you are confident that you can comfortably do them without being injured. Your perpetual growth in the number of reps is the key, which will build your muscles and will get you sculpted body.