We all know that Alexander Skarsgard worked hard for his role in The Legend of Tarzan (2016). He had shared the bits and pieces of his workout and diet routine before the release of the film that we had already shared with you. Now his trainer has revealed vital details of how the Swedish actor changed his body completely for the film. The task involved a lot of careful planning, a dedication to following the rules and meticulous hard work. Read all about that here.

Mr. Porter reported that though Warner Bros offered to hire a trainer for the Stockholm-born actor, he opted for working with an acquaintance Magnus Lygdbäck. The reason for choosing his own trainer was that the actor wanted to get on well with the person who was supposed to be with him almost all the time, especially at 4:30 in the morning every day.

The aim of the hardcore workout sessions and a strict meal plan was to help the Hidden (2015) actor to gain 25 lbs within 3 months. They succeeded in achieving this aim.

The diet plan of the Zoolander 2 (2016) actor was not fixed. It changed with his changing workout regime. All the while his diet plan excluded having any wheat, dairy, sugar, gluten, and alcohol for months.

The key food items that were vital part of the eating plan included lean meats, slow carbs, and good fats as they helped him bulk up. During the cutting stages, the meals were focused on slow carbs and seafood like fish, shrimp, and lobster.

The diet also included having carbs at night so that the brain can function properly. If the brain won’t work properly, you cannot recover and will have poor sleep. So, you must eat slow releasing carbs that have high fiber at nighttime.

The War of Everyone (2016) actor was able to constantly change his diet and ate up to 7000 calories a day because he has a strong metabolism, thanks to the fact that he has been very fond of distance running.

The talented actor and his nutritionist were spotted having a cheat meal in an Italian restaurant when the shoot was going on for the film. Magnus Lygdbäck shared that they went in for the cheat meal because the star needed that. He was eating out of the box 6 or 7 times a day and he was exhausted from working out so hard. When they were in the restaurant, the trainer picked the food for the actor and they had a good time. The cheat meal didn’t throw them off the course as the celebrity didn’t gain any extra weight or fat. On the contrary, it helped him to get more physical and mental energy as he got back stronger the day after.

Magnus shared that before they came together for Tarzan, The Giver (2014) actor was a running enthusiast. He ran 10k (races) four times a week which was great. But they had to change this routine as he was burning off a lot of calories that were needed to help him put on weight. Running in the past did help him to have high energy levels that were handy while working out hard for the film.

The journey began with building some lean muscle mass and it was followed by the vital bulking phase, reports JOE.co.uk.

In the bulking phase, the former Swedish anti-terror soldier followed a plan that helped him to add weight in a three months time without adding too much body fat to his amazing lean frame. The bulking phase also involved eating 5,000 calories in a day which was then increased to 7,000 calories per day. The calories were increased because he was losing weight and body fat despite eating 5000 calories everyday.

The workout routine of the current boyfriend of model Alexa Chung was very intense. His weekly training plan was divided into focusing on different body parts such as chest, legs, front delts, rear delts and back. A whole day was reserved for biceps and triceps.

In every session, the gifted actor began with a meaty pyramid set on a big lift that was much like squats or bench press. He kicked off with 21 reps on a light weight and the weights were increased while the reps reduced to 10, 8 and 6. He always finished with 10 rep burner to ensure that his muscles were aptly exhausted.

The program was designed in such a manner that the muscle was hit from every angle and a range of different exercises focusing on each body part was done.

The core training was aimed at making the abs pop. For this, the exercise routine involved doing a mixture of static core work such as planks and rotational exercises such as obliques.

Another vital aspect of the workout regime was movement training so that the Tarzan didn’t look like a bodybuilder out from a gym but a lean, long and muscular man who has been honed by the jungle.

All in all, the bulking phase involved a bit of movement training and a lot of stretching and strength training.

The son of Stellan Skarsgard built some muscles in three months while he ate 7000 calories in a day. But when the shooting for the film was about to start, the calorie intake was reduced and the focus shifted on keeping the muscles intact while shedding fat. At this stage, cardio came back into play. This stage lasted for about 4 to 5 weeks only.

Lygdbäck also added in HIIT and strength training during this period. The HIIT training sessions were done in the morning that included several 20-minute sessions filled with functional movements to give the body a short & sharp shock. The sessions also included sprints. The intensity of strength training exercises was also boosted up along with including some high paced exercises.

The renowned personal trainer explains that people often don’t realize that lifting heavy weights can lead to a lot of weight loss as it takes around two days for the body and muscles to recover. So, basically, you will be burning off fat for two days. The amount of fat burned will increase if you do some high-intensity training or run during those two days. Heavy lifting also produces a higher level of testosterone which boosts the amount of muscle mass, reduces body fat and helps people to recover faster.

The next phase was cutting phase in which the skilled actor did 10 to 14 sessions a week which played a key role in making him look ripped for the film.

The versatile actor also got a lot of compliments from his trainer. He said that the Hollywood actor is a very hard working individual who is determined to achieve his goals. He is also a nice human being and the fitness expert felt nice to work with him. He literally had to force Alexander to take a day off from workouts and relax a bit.

On the other hand, the hot actor credited his team for the results he got. He said that he had got a team of awesome people who told him what to eat and when to workout. Their support helped him to look amazing in the film. He also added that he has never done something like this before and he may not have succeeded if he didn’t have a great team. 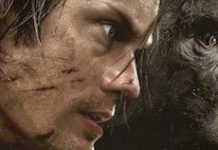 Alexander Skarsgard Workout and Diet for The Legend of Tarzan