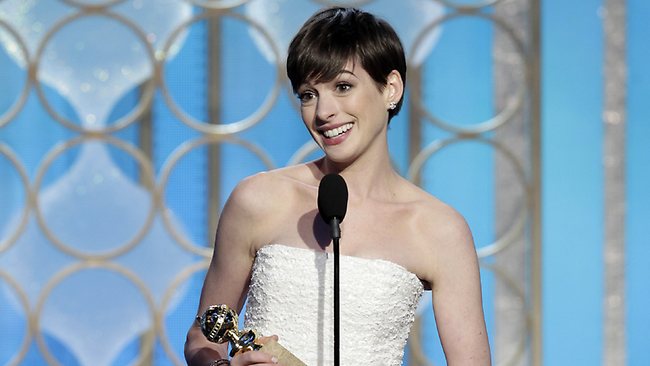 On 12th November 1982, a gorgeous woman who is setting new standards in the American film industry was born in America. She started her career on small screen and acted in “Great Real” TV series in the year 1999. She also worked in several stage shows but she dazzled the world of entertainment with her movie debut in “The Princess Diaries” as Mia Thermopolis. Her acting skills and her stunning figure caught the eyes of millions. The perfectly engraved dark eyes with finely sculpted body brought in her way success and the movies “The Princess Diaries” and “Valentine’s day” acted as the ladder. These features compiled together to place her among “50 most beautiful people” in the world. Anne Hathaway is rocking the world with her performances and put an end to all the rumors after she started getting awards one after another and these awards are Golden Globe, Emmy, Bafta, Actors Guild Award and Academy Award. She won the Oscar Award 2013 for supporting actress for playing the prostitute Fantine in “Les Misérables”.

Millions of people want to know the secrets of attaining the perfect carving like Anne Hathaway and are really ready to be disciplined like her. Let us have a look at her workout regime and diet plan.

The Workout Strategies Of Anne Hathaway

The marvelous alteration from skinny notion to the hot sizzling cat woman configuration made her among the sexiest stars of her times, as stated by Entertainment Weekly. The subtitles of being pudding person in the industry are also allotted to her.

As per her requirement in roles demanded by her characters, she needs continuous workouts. The necessity of proper physique for her movies compel her for at least 10 pushups and pull-ups, 5 in number, in addition to air squats not less than 10 times. Her trainer, all the time, tries workout plans of seven different types to save Hathaway from getting bored. She alternates with one day of “mini boot camp” while another with Power Yoga.

Anne Hathaway keeps an eye over her weight by extreme training at gyms. It helps her to beautifully visualize the stint seen on the big screens. The way, she gives her fight scenes collects so much appreciation due to her intense workouts. While exercising, she takes appropriate care of her heart and therefore after every attempt to strenuous workouts, accurate intervals are planned.

Whenever Hathaway is on any journey, it does not mean that she is going to miss her scheduled workouts. Her punctuality goes on with the help of DVDs that motivate her to follow the regular body plans while traveling also. The disciplined involvement in Bikram Yoga also makes her ready to be dressed in various fashionable dresses and tight outfits.

The actress survives fully on vegetarian foods as recommended by her dietitians that educates and motivates her to remain fit and healthy. This helps her to avoid the addition of extra fat to her body. Commonly, the leafy nutrient like kale occupies her meals and now a days, cabbage is one of her contents in plate. She avoids eating heavy protein rich stuff and those foods that are rich in carbohydrates.

The secret to the feminine appearance of Hathaway includes her sticking to the fresh edibles. She never goes for processed stuffs because she wants to be away from any kind of preservatives. Her body would never be devoid of anti-oxidants as she herself cooks fresh food from unsullied green and leafy materials derived from plants. This keeps proper check on balanced supply of proteins, vitamins, carbs and minerals. Even after this, if her diet is not up to her satisfaction, then juices prepared from fresh fruits and milk is supplemented to her. Special inclusion of the citrus fruits is also found in her diet chart because these juices help to maintain the glow and tone of her skin.