We all loved Channing Tatum’s body in Magic Mike XXL (2015) and if the survey conducted by Alpha Man magazine is to be believed, his body has made him win the title of best celebrity body that men aspire to have. You must be curious about how the actor got such an amazing body and who helped him with that? Well the answer is extreme workouts and strict diet plan designed by celebrity trainer, Arin Babaian.

For those of you who don’t know, the team of Arin and Chan showed such great results because they have worked in the past for changing Channing’s body for films like White House Down (2013), 22 Jump Street (2014) and Foxcatcher (2014). So what did this team do this time to help Channing look so gorgeous? Here’s the answer:

Daily Mail recently reported that the duo started off the task by discussing about the character Mike Lane who now had a business in furniture, building and also did delivery of some pieces. So they decided that Channing should aim for a bigger frame in order to do justice to the character’s hard work.

In the beginning, the former model had to focus more on outdoor activities because his wife, Jenna Dewan was filming a TV show in Vancouver, Canada and the family had relocated to that location.

The target of the entire task was set to help Tatum lose around 25 pounds to help him achieve the target weight of 185 lbs from 210 lbs. They also had to complete this task within a time span of just ten weeks so they started with Arin moving to Vancouver to save time and get better results.

The focus of the training was not on attaining a particular number but on making the movie writer look and feel good about himself. Babaian also wanted the movie star to make everyday a healthy day because if he attained that, he would have had lost some excess weight too. (That’s some cool advice for all health fanatics!!!) 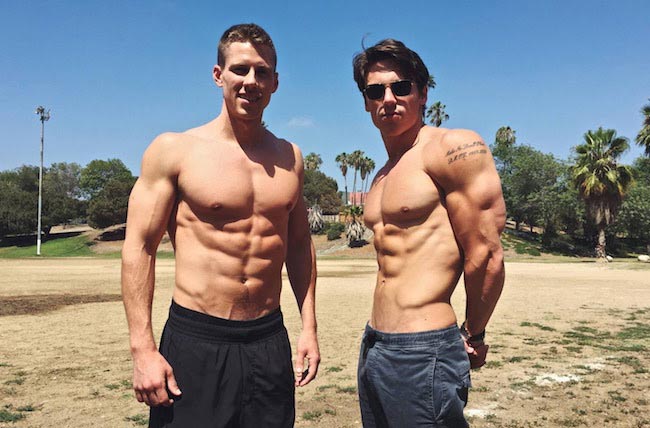 The workout routine was very taxing. It started with early morning bike rides on roads and hills in which they had an average of 25 miles and did climbs of around 2,300 ft too. The bike session was followed by a quick shower and a swift meal. After the short break, they would hit the swimming pool in which the handsome hunk did 100 laps or a workout of some laps followed by 25 crunches or 25 push-ups or five jump outs.

The workout session resumed in the afternoon with strength and conditioning workout with weights. In this workout, each area of the producer’s body was targeted like chest, back, legs, etc. After the area focused workout, a conditioning circuit was also done.

The LA based trainer also ensured that no two workout sessions were the same and tried for variation every day to keep things interesting. (You should learn this from him to stop yourself from getting bored of workouts)

The ab workout of the celebrity was a result of direct ab work as well as weights and conditioning work. When the shooting date was near, they also focused on doing a four to six mile run every day to ensure that the body fat levels of the actor remained low and the abs showed no visible fat. (Well, it didn’t show in the movie, so mission accomplished)

Competition is the key for the dancer to stay motivated in the workout sessions. Arin understood that and worked out with him to make the workouts more successful. He also complimented the debutant of Coach Carter (2005) on his focus by saying that when he is focused, he really gives his 100% in the workouts to get the best results.

The diet plan of the versatile actor was very strict because he had to build lean muscle mass. The breakfast consisted of eggs, the lunch included grilled chicken or turkey while the dinner mainly comprised of grilled chicken or a steak with vegetables.

The snacking routine included munching only on nuts and each meal was complemented with a health drink. The health drink was usually a vegetarian smoothie made freshly by a blend of celery, kale, romaine, spinach and some fruit.

The diet plan also required Channing to eat every two hours because his body needed varied essential nutrients to ensure that his training kept on going smoothly. The diet also helped him to burn fat and build muscle.

If you are impressed by the workout routine and diet plan of Channing Tatum for Magic Mike XXL, then we are sure that you would like to know the actor better. You can do that by checking out this useful link where we have accumulated all the interesting data about the smoking hot actor.