5 ft 8 in, long and sexy, Charlotte Church astonished us when she shrunk three dress sizes and appeared in slender and toned shape. The mother of two allegedly followed the exclusive weight loss plan designed by her beau, rugby player, Gavin Henson. It was the influence of her watchful high protein diet and cardio workouts that after becoming mom of two kids, Charlotte appeared in the best shape of her life. She also refers to breast feeding as a boon to new mothers which naturally torch extra calories from their bodies. Charlotte states that her primary objective to drop weight was not to acquire rail thin and captivating figure. Instead, she lost weight because she wanted to be a healthy mother for her kids. The brunette bombshell spills out her exercise and diet secrets which are as follows.

The sultry star shares that she was never into workouts and she seldom executed them to slim down her figure. Even in her pregnancies, she didn’t freak out about her weight. However, post pregnancy, since baby weight had bulked up numerous extra pounds on her body, she was to get rid of it. Under the guidance of her fitness conscious partner, Charlotte hit the gym five times in a week and executed myriad workouts such as running on treadmill, walking, swimming, biking, varied stretching workouts etc. Apart from that, being mom of two kids also helped her burn numerous calories as she had to be after them all the time which indeed kept her on the toes.

Sometimes women resorting to workouts feel so captivated by the rewarding outcomes of it that they become victim of overtraining. Charlotte shares, excessive workouts can be even more disastrous than no workouts. It might kindle a lot of health problems in you. So, while maintaining moderation in workouts, don’t perform workouts for more than sixty minutes in a day. And prefer picking high intensity workouts over low or medium intensity ones because apart from saving plenty of your time, they will also render great workout to your body.

Charlotte doesn’t believe in the idea of crash or fad diet plans. She feeds her body all kinds of wholesome and nutrient dense foods. She immensely dwells on the consumption of lean protein, for the diet not only invigorates it but also keep her healthy for long time. She eats plenty of foods such as omelet, egg whites, fish, green veggies, salad etc. in her meals. In addition to that, she also trimmed down the consumption of junk and processed foods which actually pile up so many unwanted calories in your body.

Charlotte states that bringing creativity in your cooking habits can be immensely helpful if you are looking forward to losing massive pounds. The hottie makes her meals more nutrient dense by adding green and leafy veggies in them. For example, she mixes spinach, chopped kale, asparagus, and other veggies in omelet. In the same way, she garnishes her salad with vitamin C rich foods such as orange slices etc. In addition to that, she remains prudent towards the consumption of white carbs. She replaces white carbs with brown carbs such as brown rice, brown bread etc. Brown carbs being loaded with fiber impart you diverse benefits of fiber and save you from growing overweight.

If you are aspiring to acquire toned butt and thighs, here are two workouts which you can include in your workout routine. Apart from strengthening your glutes, quads, and other leg muscles, these workouts will hone your legs.

Complete two to three sets of the exercise with ten reps in each set. 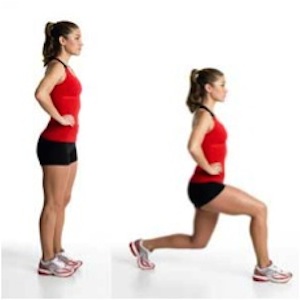 Step One – Make the lunge position, and hold your waist with both of your hands. Keep your left leg in forward and right leg in backward direction. Make sure that your left thigh is parallel to the ground and your right toe is bit bent to balance your posture.

Step Three – Make the lunge position with your right leg in forward direction and left leg behind. The entire workout shall be counted as one rep. 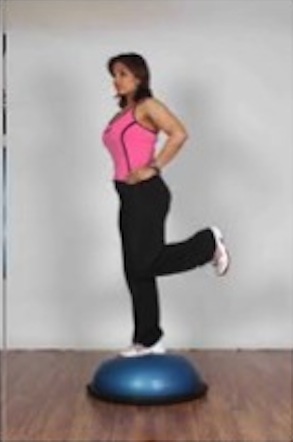 Stand straight on the ground with your hands on your waist. Now, step over a table or bosu ball while balancing your body on one of your feet. Stay in the position for ten seconds and repeat the workout by switching the legs. The workout will cause burn in your thighs, legs, hips and hence will scorch plentiful calories from these areas. Best part of the workout is that you can practice it anywhere. You can also use the workout to remove tension from your muscles.