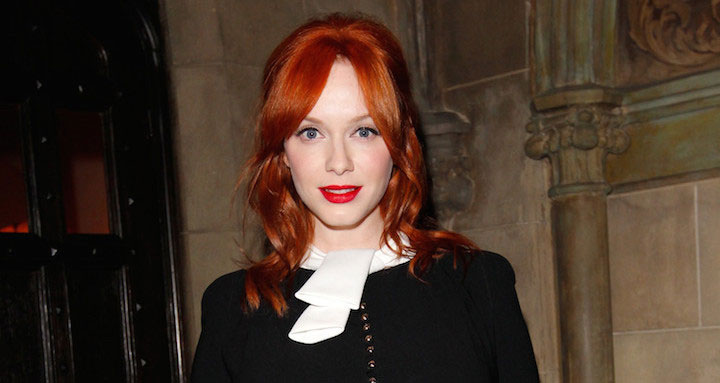 Mad Men star, Christina Hendricks is an American actress credited with enviable curvaceous figure. Her voluptuous and hourglass figure, being magnetic, captivates our attention. Apart from being voted as Best Looking American Woman by Esquire magazine in 2010, the blonde has been nominated for Emmy awards for four times for her performance in Mad Men.

Credited with ample assets, the bombshell is proud of the feminine figure she has got in treasure. However, her vital stats also cause her humiliation at times, but she is least bothered to them. Married to Geoffrey Arend since 2009, the kick ass beauty considers him her best buddy and soul mate.

Despite not being in love with monotonous routine of running on treadmill, the stunner does that for fitness sake. And the workout indeed doesn’t fail to render her pleasing results. She also practices fair proportion of strength training. However, bosu ball fascinates her the most and she does ample workouts such as squats, weights while balancing her on the ball. Owning to one very bizarre habit of transforming her workouts into thrill, she out of blue begins executing workouts such as push-ups, pull-ups etc. in the middle of reading magazine or doing some other slothful work.

She hits gym thrice in a week and practices workouts while being accompanied by her hubby and personal trainer. To her, dance is an incredible way of scorching pounds and she wishes to cultivate the habit of dancing since it meets dual purpose. First, it keeps her body in motion and second, it maintains good health of her heart. Not only has dance imparted suppleness to the actress, it also has rendered amazing capability to balance her body on stability ball. To make sure that she doesn’t let go any chance of executing workouts, she keeps kettle ball handy right next to her bed and executes strength workouts as and when she gets some time.

Christina doesn’t abide by freakish attitude towards her food items. While growing up, she used to drink cappuccino in large quantity, and that too without being regretful about it. However, having comprehended the value of moderation, the electrifying beauty relishes all her favored foods, while maintaining their portion size small. To cherish healthy eating habits, Christina keeps her refrigerator full with green and leafy veggies and fruits. She prepares soup at home while using diverse veggies, herbs, and spices as ingredients.

Although the actress is not one of the slender actresses of Hollywood, but her healthy body seems really nourished and well fed. Homemade foods such as mashed or steamed potatoes, fried chicken, quiche, sushi etc. are the most adored food items of exquisite beauty. Besides that, she feels immensely enthralled by Indian foods because they not only taste good, but their alluring aroma create appeal to savor them. She naturally being not inclined to junk foods steers clear from foods rich in high carb and trans fats. Her main motive of consuming wholesome foods is to acquire optimum health.

Every woman dreams to attain bikini-embracing figure. You might be on regular workouts to have your sought after figure, but your body might not be responding in the same way you want it to respond. Well, here come two recommendations, which will have you see swifter and rewarding results.

While practicing your workouts, work on the principle of negative accentuating. There are numerous such workouts, which involve great deal of strength and endurance such as, push up, sit-ups etc. While performing these workouts, make sure that you spend surplus or double time in reaching the ground. For instance, if one push-up of yours takes total sixty seconds, forty seconds should be spent in making your chest reach flat to the ground, and only twenty seconds should be spent in the retrieval activity.

Along-with that, nurture the habit of sitting and standing while keeping your back straight. It’s a scientifically proven fact that when you sit and stand straight, fat burning process naturally gets a boost. To improve your posture, assume as if you are being attached to the sky with thread, and that string is controlling your movements. The assumption will naturally keep your posture erect and will assist in bestowing you leaner and poised figure.