Dan Reynolds is among those celebrities who have been battling health issues nearly all their lives and are working hard to beat them. He has faced multiple physical and mental health issues, beaten them by turning to fitness, and is now fitter than ever. Here you can know his workout and diet secrets, especially when on a tour, and know how fitness helped him to be a shirtless performer brimming with self-confidence.

Things changed for the singer in 2012. It was the year when his band, Imagine Dragons signed a deal with KIDinaKORNER/Interscope Records and his wife gave birth to their 1st kid. Though it should have been a fantastic year for him due to professional success and the enhancement of personal life, it was not the case because his rare autoimmune disease ankylosing spondylitis got worse. It is a health condition in which a person has to deal with inflammation in the spine and pain in different parts of the body.

Things turned so bad that he was not able to lift his newborn daughter into his arms or perform live. He used to just hobble on stage and stand perfectly still. Apart from AS, he has also had ulcerative colitis for many years and had dealt with depression phases since teenage. Many of you might be guessing that Daniel gave up his dreams, but the fact is that the pain motivated him to transform his life and live a pain-free life.

Reynolds battled his depression by talking to a therapist who told him that the main cause of his depression was that he spent a major portion of his life living for others which made him forget his own needs. This opened his eyes and he started making decisions for himself on the basis of what he likes. His perspective on life has changed so much that he has begun to work on his relationship with his wife after announcing in April 2018 that their marriage was ending.

One more thing that he learned was to avoid drugs to cope with his mental or physical condition. He realized that pain medications were ruining his vocal cords and depending on immunosuppressants led to sinus infections. He decided to reduce his dependency on drugs by completely cleaning up his diet and exercising every day.

In early 2017, he met Brad Feinberg, a strength coach who helped him to change his fitness approach. Dan hoped to look like a superhero, so the coach designed a program for him in which he had to work out for 1 to 3 hours seven days a week.

Though his diet was also changed, the fitness efforts progressed more at the gym. The musician did more than the standard strength and conditioning routine because he wanted to get a superhero physique. He did high volume reps that promoted his overall muscle growth and trained every day of the week.

3 days of the week were dedicated to essential movements like lunges, squats, hinges, static & dynamic movements for core and horizontal and vertical pull and push in the upper body. The other days of the week were reserved for power and strength exercises such as the snatch, the clean and jerk, the Turkish get up, and the kettlebell swings.

The workout sessions during his tours included basic exercises like jump variations, deadlifts, squats, Turkish getups, and lunges. To make him look like a superhero, the focus was on kettlebell swings, curls, high-volume upper-body drills, and pull-ups. Each workout session included 20 minutes of cardio at low, medium and high intensity. The recovery was given a lot of importance because touring not only takes a toll on the body, but the performances are also stressful. To enhance the quality of recovery, the focus was on mobility and deep breathing.

The star’s diet during tours needs him to eat constantly. When he is doing 2-hour shows, he needs to have 6,000 calories in a day in order to maintain his weight. His body fat is around 6 percent at most of the times, and his meal plan is quite specific. The meal plan includes healthy options like berries, oatmeal, salads, bananas, brown rice, potatoes, lamb, chicken, and olive oil. The grueling workout sessions and the strict diet helped him to be shredded and not skinny fat in just a year.

Though he follows a strict diet most of the times, he admits that he indulges in beer or even something worse from time to time because he believes in living in the moment.

Right now, Dan has beaten depression completely because it’s the first time in 10 years that he has no depression. Though he gets sad from time to time, he admits that he is stronger than ever.

Dan Reynolds’s trainer, Brad Feinberg, recently shared a total-body burner that you can do as a finisher or consider it a short workout if you do 3 to 5 rounds. When doing this workout, make sure that you select weights that are heavy enough that you start feeling fatigued within 1 minute. The weights must not be so heavy that you end up compromising your form. You need to do each of the following moves for 60 seconds, rest for 3 minutes, and repeat up to 5 times. The moves are: 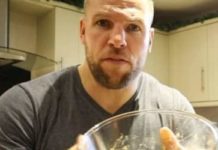