Reality TV star, Denise Welch turned the heads of millions of people towards her when she transformed from being an overweight to a slender woman. The outrageous star was in great uproar for her notorious and bold activities on the screen of Celebrity Big Brother (season nine). Although she didn’t consider her obese but she surely knew that being bulky was not healthy for her body. With prudent diet and workout routine, Denise (11 stone 5 lbs) dropped two stones and became 9 stone 5 lbs. Let’s have a look at some of the diet and workout secrets of Denise Welch, which helped her lose extra pounds.

Running – To Zap Away Calories

After making mind to melt away weight, first workout which hit Denise’s mind was running. She hopped on treadmill and ran for several minutes to trim her waistline. As for hitting gym for regular workout goes, Denise shares that her mood varies with change in season. Particularly in winters, she doesn’t feel like going extra miles to execute workouts. In spite of being in favor of light workouts such as yoga and Pilates, Denise chose running and other cardio workouts because her husband, Lincoln Townley too had been adhering to these workouts. 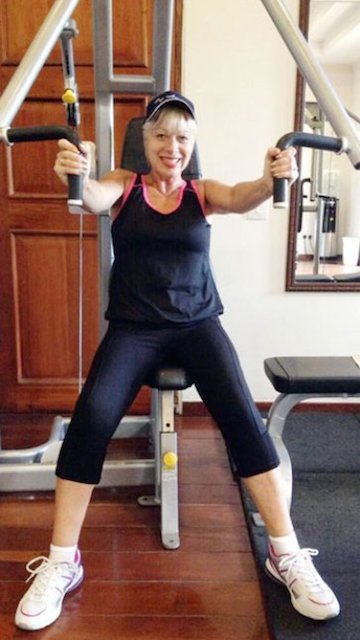 The stunner not being alone in her journey to shed weight thoroughly had the company of Lincoln. The couple joined one of the healthiest weight loss programs namely LighterLife Total program. In the program, they were supposed to be on normal diet for five days and complete fast for remaining two days in a week. Aside from providing pre-packaged nutritious foods, the diet program also makes sure that you eat portion controlled meals, which surely cut your chances of binge eating. There were nutrient packed meal replacement shakes in the plan which not only provided right fuel to her body but also kept her fuller for longer.

Along with taking care of meals, the plan also provided weekly counseling sessions to inspire the dieters and harbor right attitude towards foods in them. Denise regularly attended the session. She shares, several years back, at the time of birth of her first child, she was the victim of depression, and she often submitted her to alcohol to bring her out of that disheartened state of mind, which did nothing but aggravated her problem even more. Now, when she is slim, weight is the least bothersome thing for her. Long story short, being slender has freed her from one of the major stress points most women have.

Denise knew it well that until she will stop feeding calorie-laden alcoholic drinks to her body, she cannot expect to have slimmer body. Not only did she trim down the consumption of alcoholic brews, she also embraced healthy diet and eating habits. Adherence to strict diet indeed helped her as she melt away one and a half stone before her wedding. Staying away from booze was difficult to follow than just saying because she had been consuming it from really long time. She would often compensate her cravings for unhealthy foods with alcohol. But now when she was to refrain from alcohol, she switched over to sweet foods to have her stay tuned with her objective. Her intake of sugary foods such as chocolate bars, and cheesecakes escalated; as a result of which rather than losing weight, she added numerous pounds. Aside from that, she being a chain smoker turned from twenty cigarettes to just three in a day.

The graceful lady shares that the foremost thing needed to melt away weight is constant source of inspiration. There were myriad motivating factors instigating Denise to shed weight. First of all, she wanted to set right example of a hale and fit mother in front of her kids. Second, since she was all set to get married to much younger man in 2013, she didn’t want to end up looking a shabby ballooned bride. Instead, she aspired to look like the most gorgeous bride. And with her dramatic weight loss, she indeed achieved both her objectives. As for her maintained weight, she has been able to uphold her in great shape because her husband being fitness conscious keeps propelling her to hit gym.