From Drab to Diva: How Fitness Armed Ellie Goulding with Unmatched Confidence and Strength 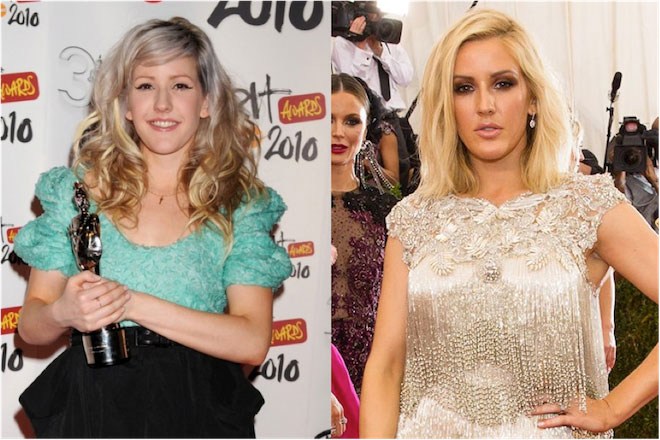 She might have sold more than 18 million singles and performed around the world, but 28 year old Ellie Goulding confesses that it was only two years ago that she discovered the art of using a concealer and getting her eyebrows right. Her love for running, on the other hand, bloomed over ten years ago. She claims, she went out running one fine day and never looked back.

Ever since her career took off in 2010, Goulding has constantly faced brutal criticism in the tabloids for both her body and fashion sense, despite never really being out of shape. Not afraid of baring her body in public, Ellie wears whatever she wants. However, the mounting pressure of looking perfect in the glamour industry that usually pushes celebs towards fad diets, starvation, drugs or alcohol, drove her towards fitness instead. People made fun of her ‘obsession’ and deemed her exercise regime as a cover-up for being boring.

Nevertheless, Ellie firmly associates her body, her lifestyle and her relationships with the word ‘healthy,’ refusing to let her fame be an excuse to go crazy and steer her personal life astray. There is a difference between being fit and skinny. Fitness represents vitality that comes with building strength.

Strength has to be earned with a responsible lifestyle. No shortcuts. With Nike’s 2015 campaign called A Melody of Movement, Goulding continues to promote strong over skinny, leading by example.

Ellie’s conscious approach towards getting healthier imparts the following lessons that convey why you should turn to fitness to get a better grip on your life.

Running is Ellie’s first love and has five half marathons to her credit. She often fits in a 5k or a 10k to support a cause for charity close to her heart. Scheduled to run another Nike sponsored 10k in June 2015, her eagerness for all other disciplines of exercise stemmed from her desire to progress and sustain herself as a strong runner.

With an aim to train six hours per week, Goulding switches between Barry’s bootcamp, boxing and Bikram Yoga. Training solo in a gym still intimidates her as much as the average women because gyms are still dominated by men, she complains. When there is no access to her favorite group class, personal trainer or workout buddy, Ellie takes to the running track in her local gym. As much as she hates to draw attention to herself, Goulding insists she will never give up running outdoors, up and down a local track just because some onlookers might catch her breaking a sweat or looking clumsy and unladylike.

Start a lifestyle change with something you like. It will be your source of confidence when you need it the most.

“The best way to push your limits is to find a buddy who will push you further,” claims Ellie via PopSugar. “You work for them.” According to UK Daily Mail, she revealed that she loves to train with her boyfriend, Dougie Poynter, and his McBusted band mates to stay inspired.

“I think having a yin and yang with exercise is the important thing for me. I love to do high intensity training, but I also love to take it easy. I say take it easy, but doing yoga is not easy,” Goulding laughs. “Doing something different every day keeps things fresh, exciting and interesting.” 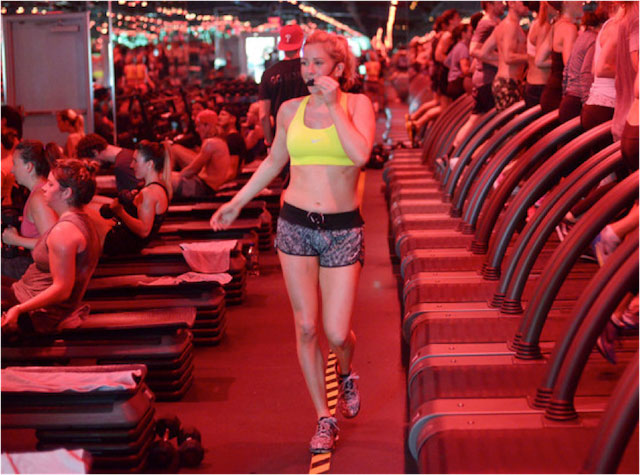 An eager devotee of Barry’s bootcamp, she took over a class in Miami as lead trainer to show off whatever she had learnt so far. The hour-long class alternates between treadmill intervals with weight training and bodyweight resistance. Nobody gets two-pound dumbbells to play with and Ellie proudly admits to lifting up to 8 kg dumbbells herself.

When you are intent upon progress in your performance, making difficult decisions like avoiding desserts, packing your own healthy lunches to manage peak energy levels and switching to vegetables just keeps getting easier. 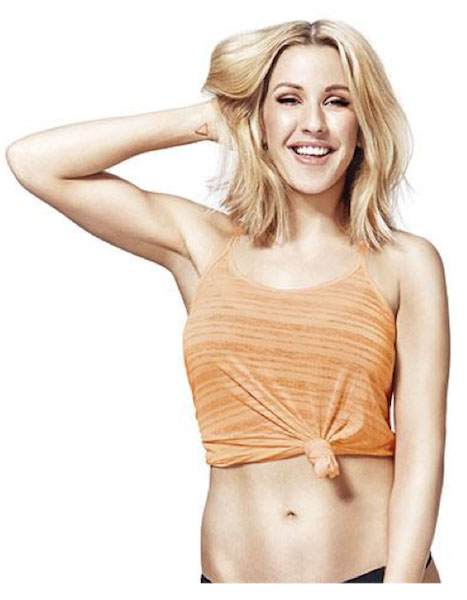 Goulding argues that those who used to make fun of her have started juicing, detoxing and yoga themselves. But, she has moved on far ahead and tags herself as a ‘burst’ girl now, rather than limit herself to slow, sustained intensity. She loves to perform what the average people struggle with. Such as sprints, press-ups, mountain climbers and burpees.

Her love for sport led her to design a new workout app for NIKE called Nike+ Training club, launched on March 2, 2015 which comprises of a 15 minute workout and includes all her favorite metabolic drills of varying high and low intensity for a full body workout.

“I think my passion for exercise and my passion for performing on stage have started to intertwine slightly because I have to be fit to do all of the things I want to do on stage. Sports and music have a similar rush. But, when I’m on stage, there’s no other feeling like it. It doesn’t come close to anything.”

Once you get comfortable in challenging your body, you will actively engage in applying your newfound skills to your everyday life. 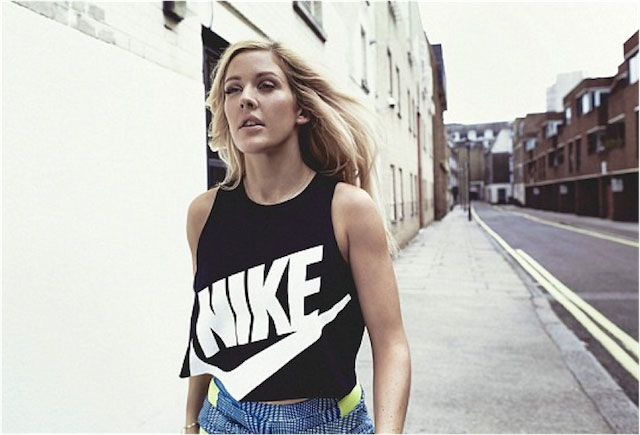 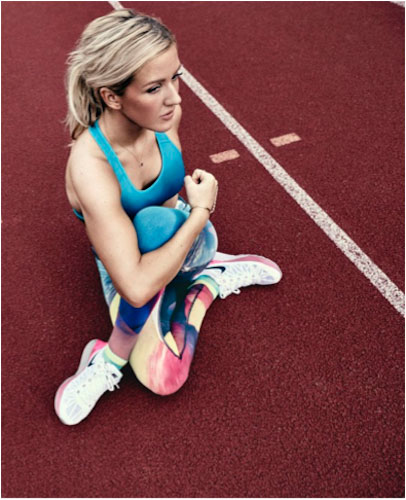 Ellie Goulding runs 10 km in forty-four minutes. This amounts to running a mile in seven minutes, an impressive achievement. She often takes to Twitter and Instagram to post selfies and workout videos to flaunt her latest headway, taking control of the image she wants to project.

In an interview to Women’s Health magazine, Ellie confessed that once she accepted that no matter what she posts about herself she is likely to face plenty of criticism, all the negativity simply turned into a blur. She does not feel the need to make a big issue of small things when her heart is full of gratitude for getting healthier and happier.

“I am not afraid of a guy saying to me that I am strong. And I will happily post pictures of my muscles on Instagram – because I am proud of being a strong girl.” 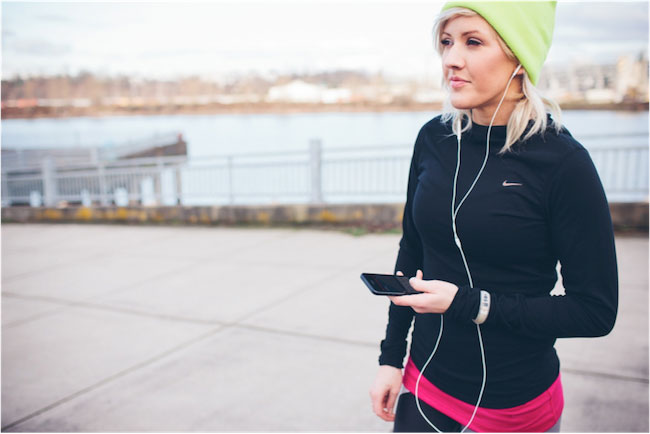 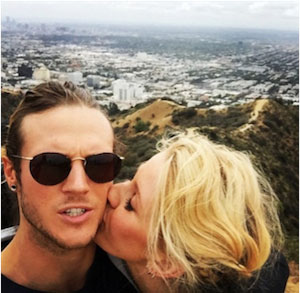 Ever since exercise became her only means to release stress, Ellie acknowledges achieving mindfulness and inner calm. Troublesome issues like fabricated babble by the press no longer bothers her. Her job as a musician involves a crazy lifestyle and her song writing requires her to delve deep into a lot of emotions. While there might be quite a few people who are unable to handle her high wired way of life, Ellie claims to retain a sound grip on reality. Her ego never takes over.

A life of discipline enables indulgences that you can truly relish. When your present is running in perfect sync, you will not waste any energy worrying about the future anymore.

“I always try not to think about the future whenever people ask me where I want to be in five years. The way that I’ve got here now is by having the same positive attitude, working hard and continuously writing, reading and keeping me inspired. If I focus on that each day, the future will take care of itself.”

Check out the YouTube montage that puts together her love for running, outdoors and post workout selfies.

Try Ellie Goulding’s favorite moves to build a strong core that helps her enjoy the mad intensity of her lifestyle.