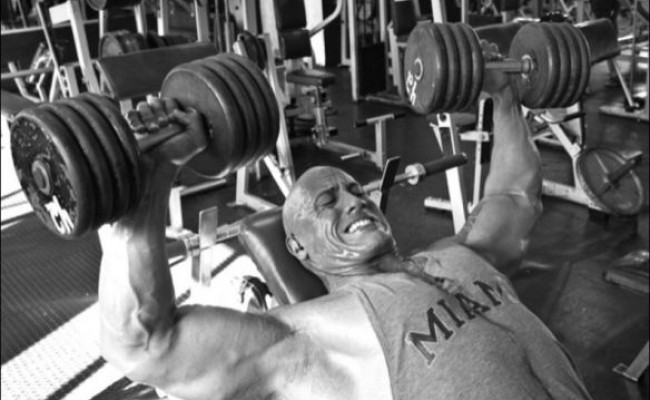 One of the most professional wrestlers, Dwayne Johnson, popular with his ring name “The Rock” is seriously preparing for his spectacular role in the movie, “Hercules: The Thracian Wars.” After starting his career from wrestling, the rock appeared in movies such as The Mummy Returns, Fast and Furious 6, Fast five, and several others.

Dwayne was 280 pounds when he was in university. Training and intense workouts shed 20 pounds from his body and he came down to 260 pounds. And then, to become a movie star, he required acquiring an athletic body. He dropped another 35 pounds for the same and reached 225 pounds.

For Dwayne, voluptuous diet and grueling workouts are not weapons to prepare him for some roles in movies. It rather is his tribute to his body, which pushes him all the while. Even if he doesn’t have any challenging role to perform in any movie, he would still pursue the same workout and diet plan.

In gym, Dwayne executes his workouts while wearing his headphones. Doing so makes him forget everything else and get entirely engrossed in workouts. Without ado, he begins his workouts like a warrior. His passion to conquer keeps him going and makes him do things, which seem quite impossible to others.

After warming up his body through jogging, or giving internal and external rotations with 5 pounds of dumbbells, Dwayne practices various sets of exercises in gym.

Having allocated his days on the basis of parts of body, the rock practices intense workouts six days in a week. He has saved Monday for shoulders, Tuesday for back, Thursday for legs, Friday for arms, and Saturday for chest. The muscular man practices variety of workouts on Wednesday and takes complete rest on Sunday.

Constantly exploring him to the new levels of workouts, Dwayne practices more reps with not very heavy pyramid structured weights in the beginning days of the week. He gradually enhances the heftiness of weights and decreases the number of reps.

Dwayne seldom practices weight lifting while using his thumbs; it makes his back stronger than his biceps, for the back takes upper hand for holding the pressure of weights.

Apart from spending a lot of time on shoulder workouts, he works on his biceps and triceps twice in a week and other big muscles once in a week. His recovery periods are very short (30-60 seconds).

To experiment your weight lifting threshold, you can start with weight lifting while making 12 reps. If you can do 12 reps comfortably, you can go ahead with bulkier weights. Dwayne increases his weights after 15 comfortable reps.

To get huge biceps like Dwayne, instead of targeting on lifting heavier weights, rely on amplifying the number of reps. Doing so would render volume to your biceps and would enhance the circulation of blood in that area.

Insane and workout freak has stair climber, treadmill, and elliptical at his home itself and he daily practices cardio-workouts for 45 minutes. 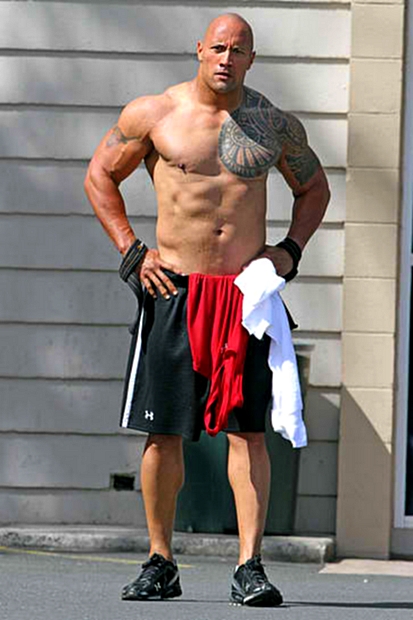 The big and sturdy Dwayne consumes 6000 calories in a day to fuel his huge body. He consumes seven meals in a day and nourishes his body with all the vital nutrients. Without relishing any ditch day, the superman strictly swears by his diet for all the seven days of week.

Don’t worry, if you are looking up to the rock as your idol, you don’t need to consume that many calories in a day. You will require calories according to your body structure, height, weight, and age. 6 ft 5 in Dwayne certainly requires that much of diet to maintain sync between his diet and workouts.

The bodybuilder’s refrigerator is always full with seven pre-packaged meals of the day. The idea behind having such a diet plan is to gain more muscles and shed surplus pounds.