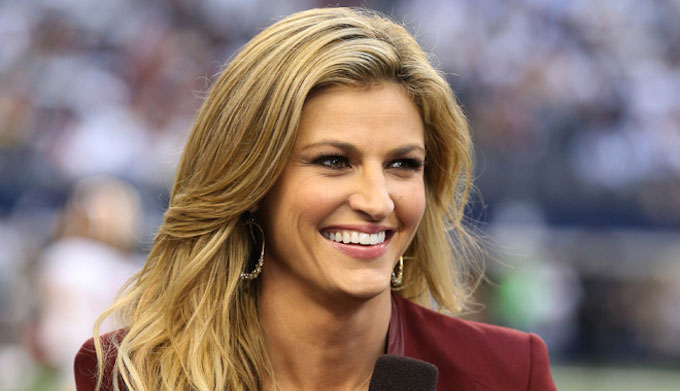 5 ft 10 in, blonde hair, Erin Andrews is an American journalist, sportscaster, and TV personality. The host of Fox College Football and Dancing with the Stars is one of the most illustrious and revered name of sports TV. The blonde bombshell not only possesses athletic body, but also has great insight into sports activities.

Credited with enviable hourglass figure, the mesmerizing beauty doesn’t fail to look hot and exquisite. Being associated with sports, Erin lives physically agile schedule and doesn’t make any room available for slothfulness. Erin has perpetually been maintaining her perfectly sculpted and slender bod from long time. And the credit for her shaped up body can be given to both her diet as well as exercises. However, exercises still maintain to gain the upper hand in bestowing the phenomenal beauty well defined and taut body parts.

Erin shares, due to being surrounded by males mostly, her behavior and eating habits have also grown like them. However, she comprehends and respects physiological differences between the diet requirement of males and females. While bearing health in mind, she remains mindful of the portion size of foods. Without saying no to several foods, she eats them in very small quantity. Her motive of eating foods is not to get full; it rather is to pacify her appetite.

She contends, instead of feeling tempted to consume your favorite cookies or chips, it’s better to eat one or two pieces of them and defy your cravings. She admits of being more inclined to fried chicken, grit, cheese, macaroni, and myriad other fried foods and she never restrains her from consuming her adored foods while maintaining their portion size small.

Her strategy to dissuade unhealthy eating habits is eat the nutrient dense portion of foods, and try making smallest consumption of unwholesome quotient of the food items. For example, when she feels like eating bread sandwich, instead of eating entire bread, she eats small piece of bread, and mainly focuses on finishing the vegetables filled inside it.

She shares; her eating habits have enormously altered with the passage of time. In her early twenties, she felt free to eat all kinds of junk foods such as pizza, burger, and drink fizzy drinks such as coca cola, soda drinks, and so on. But, with aging, she has developed eating acumen and she discreetly picks healthy stuff to unhealthy ones. As you grow older, your metabolism also begins growing frailer, so you have no other option but to nurture healthy eating habits.

Since the glam star cannot have full control over her diet regime, she compensates the loss made by high calorie foods by doing intense workouts. Being in pact with her workouts, she doesn’t feel dreary with the thoughts of workouts. Her workout regime being quite regular has her hit gym, four to five times in a week.

She has also attended workout studios such as Physique 57, for shaping up her curves and she really seemed to enjoy her sessions out there. She practices bountiful workouts such as endurance and stamina building workouts such as strength training and fat melting workouts such as cardio workouts. Her personal trainer has given her thorough training of high impact workouts which can be executed anywhere, and Erin simply loves practicing them. Besides that, yoga, Pilates, Plyometrics, and martial arts also keep moving back and forth in the workout regime of the bombshell.

Besides that, being a dancer also adds both flexibility and elegance to the sexy and bikini embracing figure of sultry star. At times, when she finds herself unable to make it to the gym, she either practices running or adheres to outdoor physical activities such as jumping rope, stair climbing, running etc. Being very tall, she puts surplus emphasis on the toning of her long legs, butts, and core. To stay immune from monotonous workouts, she keeps switching to variety of workouts.

Here comes one recommendation for the fans of Erin Andrews aspiring for shaped figure like her.

Most of us keep consuming rice without knowing the fact that it’s making our body plump. However, simple swap of white rice with brown rice can have you eat high fiber and nutrient dense food item. Brown rice being covered with external layers named husk and bran is loaded with vital nutrients including fiber.

You can make your favorite rice even more nutrient packed by following a simple trick. Dip rice into the solution of vitamin B, proteins, and fiber. White rice will efficiently soak the solution and its color will turn into brown or red. Doing so will make rice extra nutritious, even more than brown rice. The best part of polishing rice like this is, doing so will neither change the taste nor fragrance of rice. Moreover, it takes less time in cooking and is easy for your body to assimilate.