Gina Carano is an American actress, television personality, fitness model, and former mixed martial artist (MMA) who competed in EliteXC and Strikeforce from 2006 to 2009 and was called the “face of women’s MMA”. Alongside Cris Cyborg, she became the first woman to headline a major MMA event during their 2009 Strikeforce bout. She has also branched out as an actress and has been cast in roles like Carrie in the crime comedy film Madness in the Method, Riley Hicks in the action film Fast & Furious 6, Carasynthia “Cara” Dune in the Disney+ space Western series The Mandalorian, Angel Dust in the superhero film Deadpool, Officer Kris Bauhaus in the heist action thriller film Heist, Veretta Vendetta in the martial arts film Blood and Bone, Atticus Gage in the post-apocalyptic science fiction/action film Scorched Earth, and Clair Hamilton in the action thriller film Daughter of the Wolf.

After that, she was enrolled at the University of Nevada, Reno, and went there for a year.

Finally, she took admission to the University of Nevada, Las Vegas to minor in psychology. Gina went to this university for three years.

In 2021, her net worth was $4 Million according to CelebrityNetWorth.com.

She is of Italian, English, Scottish, smaller amounts of Scots-Irish/Northern Irish, Dutch, and German descent.

She has appeared in a Pepsi Super Bowl commercial in 2009.

She has endorsed the clothing company Under Armour (UA) brand.

She was raised Protestant Christian, but now she is most probably non-religious.

Playing Riley Hicks in the 2013 action film Fast & Furious 6, and as Mallory Kane in the 2011 action-thriller film Haywire.

She debuted on June 10, 2006, playing against Leiticia Pestova, where she knocked out her in the 1st round itself in just 38 seconds. Gina was 135 pounds at that time.

Her first film came in 2009 where she played the role of Veretta Vendetta in the direct-to-DVD martial arts film Blood and Bone.

Her bigger role came in the next film, an action-thriller film Haywire for her role as Mallory Kane, released in 2011.

In 2007, she was a series regular at Oxygen’s original reality television series Fight Girls as a mentor. The show was only broadcast for 7 episodes.

As a martial artist, she used to do spend time during the morning as well as evening sessions – 2 hours each. She was really active in Muay Thai and Jiu-Jitsu. She took training from MMA trainer, Greg Jackson.

After starting her acting career, she has started doing light exercises and performs yoga. Gina even intakes a carefully balanced diet.

You can check out her workout routine and diet plan. 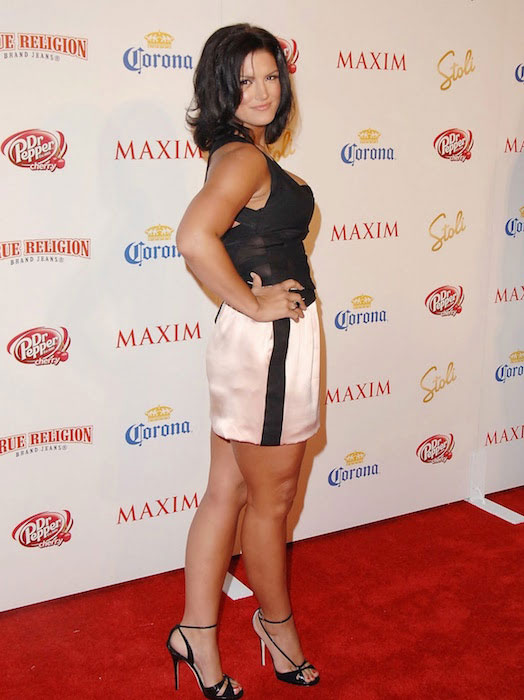