He left school at the age of 17 to work as a disc jockey.

However, his hair has turned gray due to his advanced age. 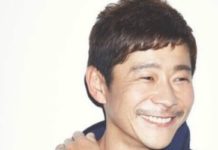