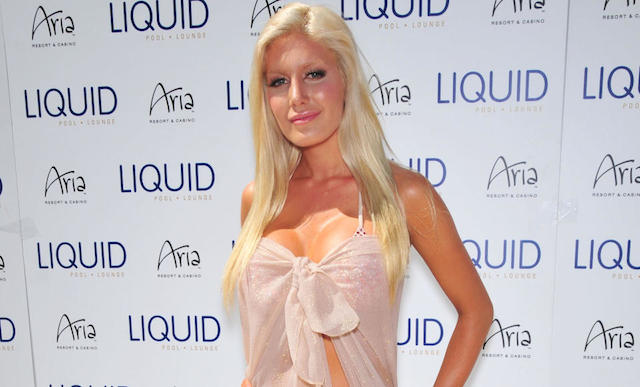 5 ft 2 in, blonde hair, Heidi Montag is an American actress. Naturally slender Heidi is always seen in awesome svelte shape. However, recently with shedding of twenty seven pounds, she in particular looks extremely beautiful and captivating.

Immensely dwelling on plastic surgeries, the actress has been under knife countless times in her life. Totally disgruntled with her body, the stunner has been through breast augmentation, hip augmentation, waist liposuction, thighs liposuction, neck liposuction, nose job, and myriad other surgeries. After being through so much so plastic surgeries, the blonde finally seem to feel consumed by them, for despite being unhappy with her breast size, the actress doesn’t wish to go through any more surgery.

Heidi shares, after surgeries, she couldn’t take good care of her body, as a result of which she grew 130 pounds, which was the heaviest weight she had gained in her lifetime. Although 130 pounds cannot be counted as hefty weight, but due to being petite, the actress could be called bit overweight. Instead of growing emaciated, she always targets to accentuate her curves.

The sizzling actress reckons, her careless eating of junk and unhealthy foods were mainly responsible for her gaining weight. However, before long, she realized it and made some drastic changes in her diet. She jumped to healthy eating habits and incorporated copious highly nutritious and balanced foods such as complex carbs, lean protein, healthy fats, high fiber foods etc. in her diet Being naturally more inclined to wholesome foods, the actress cherishes green salad, apples, cherries, fruits, fried chicken etc.

Apart from that, to save her body from getting deficient in nutrients, she ate her meals five times in a day. Since junk, processed, and sugary foods create obstacle in your way to torching pounds, she made healthy swaps and replaced her food choices with healthier ones. She satisfied her sweet tooth by eating sweet foods occasionally in moderation. In addition to counting on wholesome diet, the glam beauty also refrains from degenerative beverages such as alcoholic beverages.

Having got the realization of being obese, Heidi sworn by the healthiest way to acquiring slimmer shape and that was by practicing workouts. She hired personal trainer, Chad Waterbury to devise exclusive workouts for her. Determined to strip off calories from her body, the smashing star didn’t even step back from executing workouts fourteen hours in a day.

And her perseverance and dedication paid off her quite well, since within a month or so, she was able to sculpt her body from right areas and give it a perfectly curvaceous look. To scorch pounds, Heidi spent several hours in running and performed various strength training exercises. Exceedingly overwhelmed with the influences of workouts on her body, the sultry actress shares, workouts not only toned her body but also revved up her metabolism. She executed myriad other workouts such as kettebell swing, medicine ball slam, kettlebell deadlift, squat thrust etc. to tone her body.

Are you also one of the fans of Heidi Montag and aspires to have enviable figure like her? Well, with little cautiousness and discreet eating, you too can have lithe and ripped figure like her. However, you are advised not to try to imitate swift way of shedding weight, as was followed by Heidi.

The actress being victim of compulsive exercise trait executed workouts incessantly for hours. You are recommended not to go along with the footprints of the actress for they can catapult you to doomed results. Workouts indeed are beneficial but their excess too is not good for you. You need to do everything in moderation; else, your physiology can drastically go out of control.

Rather than abiding by something illogical, you should aim to practice thirty to sixty minutes of workouts in a day and eat nutrient dense foods. Seldom feel captivated by crash diet plans to shed pounds for they can only create shortage of nutrients in your body. Begin your day with healthy foods such as oatmeal, yogurt with berries, egg whites etc. and keep eating small portion size of foods after every two to three hours. Your judicious eating in harmony with wary workouts will get you your desired figure.