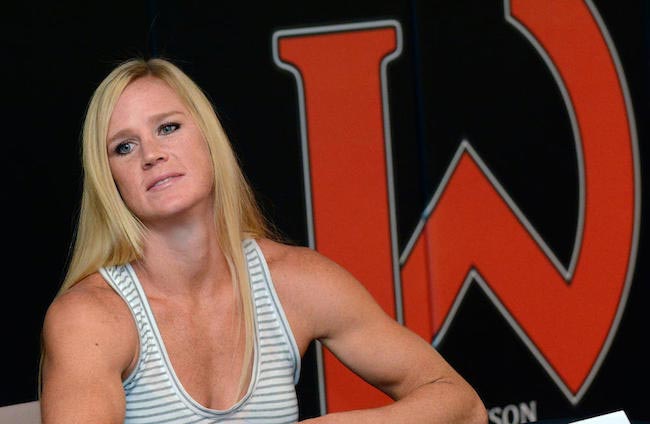 In 2000, she graduated from Manzano High School in Albuquerque, New Mexico.

Post that, she spent 1 year at the University of New Mexico.

She is the daughter of a preacher.

She has appeared in ReadyEverySecond.com’s commercial.

She debuted on January 25, 2002, when she fought a boxing match with Martha Deitchman and won by 1-0 via Technical Knockout (TKO) at Isleta Casino & Resort, Albuquerque, New Mexico.

She appeared in the 2015 action film Fight Valley for her role as Payton Walsh.

Holly’s first television appearance was in 2013 in the TV series Bellator MMA Live as herself in an episode entitled “Bellator MMA 91.”

Holly Holm, being a sportsperson has to take care of her health more than any normal person. She runs for 5 days a week and does strength training for 2 days in a week.

Holm also undergoes a cardio-kickboxing class for fun and muscle recovery. It also provides her with a full-body workout and keeps her away from boredom, unlike the gym.

The athlete eats clean and stays away from unwanted greasy food items such as junk food and others. This does not mean she watches her diet/calorie intake closely.