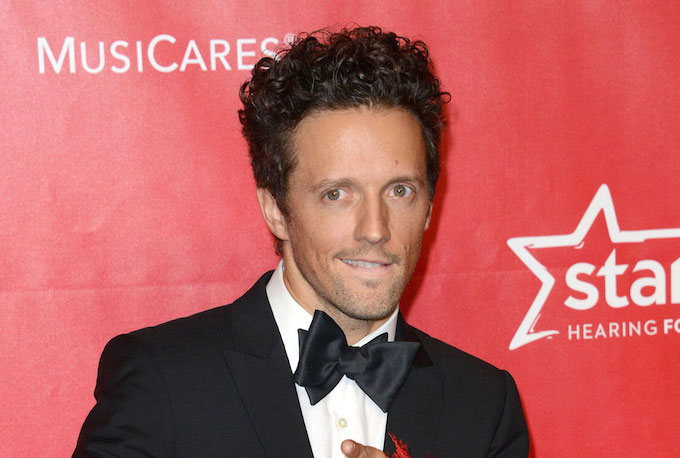 Hazel eyes, smart and witty, Jason Mraz is an American singer. Grammy nominated for his song “I’m Yours”, the handsome actor has great fan following. The dashing singer not only has awesome voice but also is possessor of perfectly chiseled physique. His ripped physique is sufficient enough to make any girl in the world fall for him.

The illustrious singer being full of vitality and life loves giving bare feet stage performances and doesn’t fail to captivate us with his euphonious songs and thrilling performances. Credited with perfectly lean and toned physique, Jason feels proud in flaunting his body in shirtless shoots. Besides, he doesn’t refrain from posting his shirtless images on Twitter.

Jason is one of the Hollywood celebs who have been lingering on to vegan foods and point up their consumption more than anything else. Being seventy-five percent vegan in his eating habits, the heartthrob actor inculcates copious plant based foods in his diet. He loves incorporating ample raw food items such as raw fruits, vegetables, nuts, seeds etc. in his diet. Sentient about the nutrient deficiency of processed and junk foods, Jason maintains considerable distance from those foods.

He considers consumption of processed foods identical to that of consumption of cardboard for both the food items are void in nutrients. He reckons, heedless intake of foods lead you nowhere but make your body host of diseases. While being accompanied by the victim of type 2 diabetes patient in his band, the singer learnt how to keep him from sugary foods. With the help of a raw food chef, he learnt how right ingredients and procedures could help in having him relish yum foods and that too without being bugged by the disastrous craving for raw foods. By being little bit more cautious and innovative towards recipe of making naturally sweet desserts, you can satisfy your sweet tooth.

All you need to do is make some healthy swaps such as replacing hummus with low fat cheese and sugary foods with fruits. Doing so will not only keep you far from unsolicited calories but will also keep you away from severe ailments. Apart from raw foods, mildly cooked hot foods such as roasted veggies, vegetable soups etc. are very much favored by Jason. He reckons, spending some extra hours in grocery stores for choosing natural and raw foods for you to eat are worth doing for they promise to get you rewarding results. While travelling he doesn’t forget to carry numerous highly nutritious nuts with him such as almonds, avocados, and pistachios etc., which keep his hunger at bay and bestow adequate nourishment to his body.

The smashing singer is an avid runner and can run incessantly for hours. He shares, since the time he has been succumbing to raw vegan diet; he has been feeling awesome and immensely invigorated. With his energized body, his workout stamina too has elevated and he finds himself doing more push-ups, cycling etc., he ever could do in bygone days.

He contends; when you live a lifestyle wherein your diet is in harmony with your workouts, spree of healthy transformation begins occurring in your body, which is potent to make life most beautiful for you. He found great metabolic, mental, and physiological changes occurring in his body after making apt changes in his diet and exercise regime.

Jason recommends all his fans to follow right approach to acquire desired toned physique. Instead of being goal oriented, you should try to be realistic. Many times, it happens that a weight loss program might have worked pretty well for your friend but when you followed that, you only ended up getting futile results.

You need to understand that there are diverse determining factors, which are responsible for altering the influence of weight loss programs on you. Age, sex, weight, height, body type etc. are some of the dynamics affecting the impact of weight loss program. Instead of being thwarted, try to figure out the foods and exercises, which are compatible with your body. For instance, you might be intolerant towards dairy products, gluten-containing foods, or anything like that. Feed your body the foods, which assist your body in dropping pounds rather than instigating inflammatory reactions in your body.