Outstanding beauty, captivating smile, curvy figure indeed are the hallmarks of American actress Jessica Capshaw. Endowed with sculpted and toned physique, the stunner always looks ready to kill us with her sexy style. Married to Christopher Gavigan since 2004, the sultry actress is a doting mother of three children. However, none of her pregnancies could hamper her zeal to look sensational and appealing.

The Grey’s Anatomy star cherishes beautiful and warm relationship with her husband and often goes out on date with him for lunch, which totally invigorates her relationship and makes it grow stronger. Bikini embracing figure and flawless skin of the actress certainly makes it hard for us to take our eyes off from her. The ravishing actress not merely has awesome body but also possesses immense inner power. Having great faith in fate, Capshaw reckons that everything in life happens for a reason. Let’s have a look at the diet plan and workout routine of the lovely actress which aid her in accentuating her beauty as well as charm. 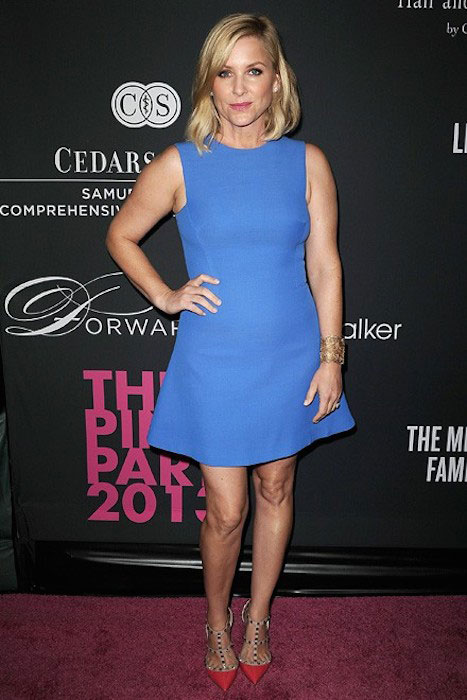 Diet is one of the most important determinants which either makes or breaks your body. Capshaw inevitably uses this factor in the most judicious way. And the fact of her being married to Christopher, who is Healthy World’s former CEO also helps her a lot in sticking to the healthy lifestyle. It can aptly be called the influence of health conscious husband that now, she comprehends the ill impacts of ever increasing toxic components in the food items, which we inadvertently consume in our day to day lives. She has forbidden the consumption of red meat and fish, due to their high mercury content. Consumption of these toxic foods might cause serious ailments in you.

Having got familiarized with the value of foods, she feeds organic foods and incorporates bountiful fruits and veggies in her diet. It’s the influence of lean and clean foods which is apparent on her radiant face and body. The blonde beauty favors five to six small meals in a day. Doing so keeps a check on her blood sugar level and nourishes her body with adequate nutrients.

The pretty actress has sweet tooth. However, she has discovered some really cool and powerful ways of keeping a check on her cravings for sweet foods. She keeps delicious and nutrient packed energy bars, peanut butter, yogurt, honey etc. handy with her all the while and consumes them whenever she craves for sugary food items. Once in a while, the bombshell also splurges on her favorite foods such as chocolate, cheese, bread, etc.

Capshaw favors living a physically active life. Instead of sitting idle, she engages herself in playing games along with her kids. By doing so, she not only plays the role of a responsible and doting mother but these activities also aid her in maintaining her figure. Capshaw is not obsessed with workouts, for her super agile schedule already keeps her on her toes all the while. While sparing few hours from her kids and profession, Capshaw somehow manages to draw four to five hours in a week for workouts.

Being averse to running, the sassy actress prefers dance over running. Apart from that, she is a big fan of Tracy Anderson method. She shares; she could notice great changes taking place in her body with the use of Tracy Anderson method. Doing workouts while playing the music of her favorite stars such as Rihanna, and Black Eyed Peas is something the blonde beauty adores. She experiences an exceedingly high rush of adrenaline in her body while doing so which makes her feel amazing. Her lean and sexy legs which are the most remarkable features of Capshaw’s body, seldom fail to flatter her, even when she happens to gain surplus weight.

Here is one healthy recommendation for Jessica Capshaw fans, wishing to acquire enviably svelte figure like her. First thing you should do is pay attention to the foods you eat in your day to day life. Should you inculcate foods having thermogenic property, you can transform your body into a fat burning machine. Since these food items are hard to metabolize, your body requires bountiful number of calories to assimilate these food items which kick start fat burning process in your body.

Some of the food items which can get you the benefits of revving up your metabolism are brown rice, oatmeal, grilled chicken, green tea, green smoothie, lentils, hot peppers etc. Without poking yourself to consume tasteless and difficult to gulp foods, you can make weight loss a soothing experience for you by astutely incorporating these foods in your diet regime. You can expect to shed around two to five pounds in a month by discreetly abiding by these food items. And the influence surely would amplify should you harmonize them with regular exercises.