Mark Benton is a British actor who fine-tuned his acting entertaining skills at RADA, the Royal Academy of Dramatic Art, where vocational training is offered for actors, stage managers, designers, and technical stagecraft specialists. He has been entertaining audiences professionally since 1991, on the big screen, TV, radio, and on the stage.

In 2013, he competed in the BBC One talent show Strictly Come Dancing and exited on the 10th week after losing the public vote. He is involved in charitable acts, serves as a patron of Zoe’s Place Baby Hospice that provides palliative, and respite care for babies and children who are sick.

Mark Benton attended Sarah Metcalf School in Eaton, Middlesbrough and Stockton Billingham Technical College. He later got enrolled at the Royal Academy of Dramatic Art in 1986.

Mark Benton made his feature film debut playing the role of a barman in the 1994 film There’s No Business.

Mark Benton made his TV show debut playing the character of Charlie Hardiman on Boon in 1991. 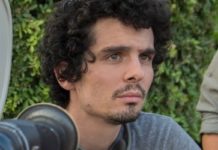