Maximo Rivano is an American social media personality who became famous through his dancing and lip-syncing clips on TikTok. He is also a high school athlete who primarily plays soccer and uploads videos from his games on the platform where he has amassed more than 900k followers. Maximo is also popular on Instagram where he has more than 200k followers. He often collaborates with fellow TikTok stars, Mark Anastasio and Luca Lombardo.

As of December 2019, Maximo was in the freshman year of high school and on track to graduate from high school in 2022.

He is of Chilean, Spanish, and Dominican descent. 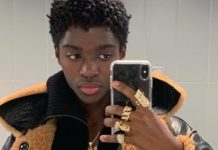