4 ft 8 in, reality TV star, Nicole “Snooki” Polizzi turned millions of curious eyes towards her when she shed massive fifty pounds within eleven months. Past the birth of her first child, son Lorenzo in August 2012, she bulked up forty pounds. Since Snooki didn’t wish to be an overweight and unhealthy mother, she embarked on the mission to drop weight. Overwhelmed with her makeover, Snooki dishes out the secrets of her diet and workout routine which assisted her acquire sculpted shape.

After making her mind to drop weight, first thing Snooki did was – she weeded out alcohol from her diet, which has nothing but empty calories. Aside from the wicked drink, she also cut back the consumption of sugary, diet, and fizzy drinks which pack up numerous calories in your body. Eradication of these beverages surely stripped off bountiful pounds from her body. The gala girl feels that not only has her makeover boosted her energy, it has also made her become a better person. If you aspire to shed weight, you shall steer clear from vices. When the party girl who was so much in love with alcoholic drinks can say goodbye to the drink forever, why can’t you and me remove it from our lives.

The tiny star is victim of eating disorder, anorexia since her childhood. The stunner admits that she grew anorexic due to cheerleading. In the urge to grow light like a ball, she grew anemic and remained mere eighty pounds. During that time, for several days, she only ate ice cubes to survive. Thanks to her parents who helped her get rid of the disease. However, after getting rid of anorexia, Snooki indulged herself in junk and unwholesome stuff and ended up bulking countless pounds. Afterwards, she had been on the roller coaster ride of weight unless she submitted herself to healthy means to strip off pounds i.e. workouts and balanced diet. Snooki no more wishes her body to act on the commands of disease. Being a mother, she is prudent about the health of her little one, so she doesn’t deprive her from wholesome and nutrient dense foods.

She shares, initial twenty pounds came off easily from her body with breastfeeding in initial two months. However, to melt away rest of the extra weight, she had to tremendously bank on restrained number of calories. Immediately past the birth of her son, Snooki incorporated low calorie diet which allowed her consume 1250 calories in a day. Her diet being allocated in five small meals bumped up her metabolism and rendered adequate nourishment to her body. The brunette loves eating green and leafy veggies such as broccoli, spinach, green beans, asparagus etc. Lean protein such as grilled chicken, gluten free wraps support her body amplify the number of lean muscles.

Determined to acquire slender and curvaceous figure, the petite star executed workouts five to seven days in a week. Under the guidance of her personal trainer, Anthony Michael, Snooki performed myriad exercises to condition her legs, arms, back, and core. Her workouts being primarily targeted to multiply her muscle mass had her practice weight training with heavy weights. SoulCycle, running on treadmill, jumping up and down on aerobic stepper, kickboxing, and spinning at flywheel are her most trusted cardio workouts which speed up her heart rate and spark off fat burning process in her body. Plyometric being targeted to condition her core muscles is the exercise which renders full body workout to her body. She lately has fallen in love with dance which hones her arms, legs, waist, and stomach.

Here are some exercises which shall help you in shaping up your glutes which mostly remain left out while doing workouts. 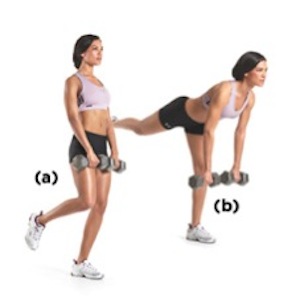 Second Step – While leaning your upper body in forward direction, lift your right leg in the air. Raise your right leg unless it becomes parallel to the ground. Put the entire pressure on your hips. Return to the resting position. The workout shall strengthen your core muscles. Make twenty to twenty-five reps of the exercise on each leg. 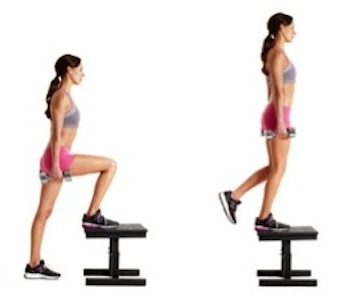 Keep your back and shoulder straight and stand in front of a chair or bench with dumbbells in your hands. Step up your right foot on the chair. Put pressure on your right leg and take your body in upward direction unless your weight gets stabilized on right leg. After staying in the position for five seconds, bring down your left leg. Make sure that your body doesn’t lean in forward or backward direction while performing the exercise. Make fifteen to twenty reps of the workout on each leg. The exercise shall tone your back muscles, hamstrings, glutes, and render you lean legs and taut butt.