Birds of a Feather star Pauline Quirke got her name enlisted in the list of celebs with transitional weight loss when she shed massive eight stones in a year. In her fifties, Pauline who had successfully been playing the role of wife, mom, and actress realized that she is nothing but a hefty and miserable woman. She felt that she was so pathetic that she couldn’t fit into the seat belts. Her frustration with her bulky body was so much so that she would often compare herself to Sumo wrestlers, who may be as low as twenty stones. Needless to mention, Pauline was not just obese, she was also suffering from diabetes and myriad other diseases. Having seen herself into that miserable condition, Pauline decided to shed away surplus pounds. Pauline dishes out her weight loss journey, which certainly was not stress-free.

Pauline hired personal trainer Prea to help her lose weight. Prea had her step up stair case unless she got totally exhausted and out of breath. Pauline shares, she mostly preferred working out at home, as being watched by others would make her feel conscious. She felt mortified while going out with her personal trainer for she could sense people ridiculing and gossiping about her. She experienced herself getting lighter when she was being assisted by Prea. However, after bunch of months, Pauline got bored of workouts and developed slothful attitude towards them. It was only after breaking her arm that she got new enthusiasm and energy to execute workouts. 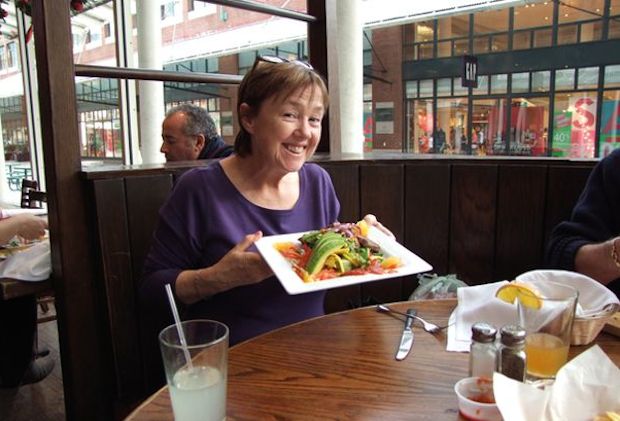 Not being skilled and sentient about the nutrient density of foods, Pauline preferred abiding by LighterLife plan. The fad diet plan being providing pre-packaged meals to the dieters takes the pressure of preparing diet chart off of the heads of dieters. While allowing mere 500 calories in a day, the plan replaces meals with nutrient packed shakes, soups, desserts, bars etc. Pauline who religiously followed the plan for six months attributes it mainly for the incredible change which took place in her body.

Just like numerous other prevalent fad diet plans, LighterLife plan too is unable to provide perennial results to the dieters. By being on ridiculously low calorie diet, since your body begins torching the source of fats to gain energy, you surely view huge weight loss. However, as soon as you retrieve normal eating habits, all the lost weight too comes back. Pauline too was nerved prior to reverting to her eating habits. If you aspire to retain the lost weight with the diet plan, instead of instantly jumping back from 500 to 2000 or 2500 calories, make gradual shifts in your calorie consumption. For example, embrace 1000 calories for one week, then 1500 for next week, and so on.

Pauline admits that her habit to binge eating has primarily been accountable for her overweight body. She shares, having spent childhood in poverty, she always valued foods more than anything else. She also learnt not to disrespect foods by leaving the plate unfinished. However, her respect for foods caused her become victim of binge eating. Consuming foods in tremendous quantity became such a habit from which she herself couldn’t save her. She admits that she cannot keep herself from her beloved foods as they attract her like a magnet.

From the weight loss story of Pauline, one thing is very explicit and that is your lifestyle dramatically influences your body. That said, just like bad habits of yours were not formed in a day or two, good habits too will take time to nurture. Make necessary changes in your customs as soon as you realize them being at fault. Here are some healthy habits which you shall make a part of your daily routine; they shall surely please you with satisfying results.

Most people turn over to unrealistic ways when they resolve to shed weight. You might often be getting suggestions from people such as eliminate sugar and salt completely from your diet. Well, it would be really great if you could entirely remove them from your diet. However, instead of embracing such unrealistic ways, the more practical approach is, prefer trimming down their consumption.

Don’t feel intrigued to fix big goals such as dropping two sizes or ten or twenty pounds in two weeks. Such goals when remain underachieved will only make you feel frustrated. To bring the path to losing weight on right track, make daily objectives such as twenty minutes running, or incorporation of green and leafy veggies at least once in a while in your diet regime.

Make it a rule that you will eat low sodium diet in your dinner. Since high sodium foods foster the retention of water in your body, you end up looking bloated in the morning. Cultivate the custom to eat steamed veggies and protein laden foods such as grilled chicken, sushi etc. in your dinner.