5 ft 10 in tall, stunningly hot, Sonam Kapoor is one of the most glam and spectacular actresses of Bollywood. The proud daughter of well-known Bollywood actor Anil Kapoor, Sonam Kapoor belongs to the category of celebs, who have been through drastic transformation for saving a place for them in the industry. The stunning actress weighed ninety kgs prior to entering into acting career.

Thanks to her wary diet and grueling workouts that she could shed thirty-five kgs from her body and attain slender fascinating figure. Despite shedding so many kilos, the hottie was never ever seen in bikinis. However, you will see your favorite actress in bikini in her 2014 movie, Bewakoofiyaan. The gorgeous actress didn’t fail to look fab even in tiny clothes. Her flat and kick-ass stomach abs, buffed arms and legs are sufficient enough to make any woman in the world envy her toned bod. 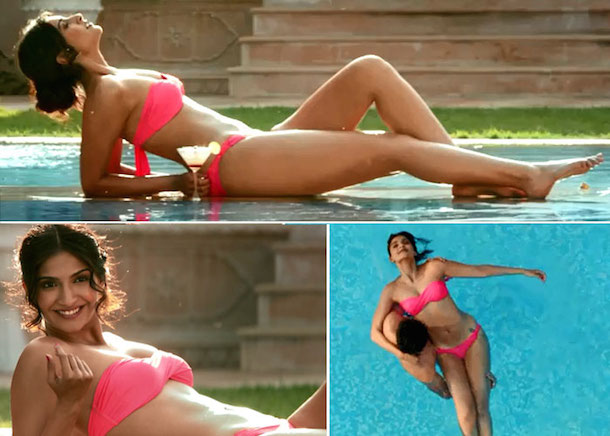 Sonam paid great attention to her diet and exercise regime and honed her body to make it look ravishing in bikinis. Since there is huge difference in just shedding weight and losing it from right places, the hot actress picked the tougher way and instead of just becoming rail thin, she worked on giving it curvaceous look. It took her persistent six months of arduous workouts and sensible diet to appear in new diva.

Sonam was seldom a prudent eater and that probably something was responsible for her being overweight for so long. However, having got superb directions from her mom, the bombshell made terrific changes in her diet. Instead of dwelling on junk and unhealthy foods, the stunner began relying on high fiber fruits, vegetables, whole grains, and all other nutritious choices of foods. Sonam consumed five to six meals in a day, which revved up her metabolism and boosted fat burning process in her body.

Her diet being in complete sync with her workouts consisted of high protein, and apt amount of healthy fats. Since weight lifting exercises coupled with protein rich diet magnifies the influence of exercises by bestowing you increased muscle mass, the beautiful actress consumed protein smoothie post workouts.

And she also followed the principle of consumption of protein rich food items within fifteen minutes of workouts, which had her get the most rewarding results. The sassy actress incorporated chicken, grilled fish, coconut water, meat with mixed veggies etc. in ample amount in her diet. Besides that, she also inculcated seasonal fruits rich in fourth macro-nutrient such as watermelon, papaya, berries etc. in her snacks.

Having developed judicious eating acumen, Sonam comprehended the significance of cleansing her body with detox programs to eliminate the influence of unhealthy food items. She detoxified her body very often, in particular, past the consumption of unwholesome Indian foods such as paav bhaji, pani puri etc., which are her most adored food items.

Her personal trainer Radhika Karle had her do diverse kinds of workouts targeted to tone her body. Since no part of body is far from glare in bikinis, her workouts were orchestrated to equally buff her upper, middle, and lower body parts. Interval cardio training, cardio workouts, and Pilates being her most relied workouts were given three days each.

While interval cardio training shaped up her arms, shoulders, stomach, waist, and butts, Pilates built up her core strength along-with enhancing her posture and flexibility. Interval cardio training practiced by her included three to four minutes of cardio workouts, followed by medium intensity weight lifting exercises. Although it was not at all easy for her to abide by tough lifestyle after going through hectic shooting schedule, but the actress kept her in high spirit by perpetually reminding her of her weight loss objective.

Do you also wish to acquire svelte figure with incredible curves like Sonam Kapoor?

You too can have bikini-embracing figure by being on regular exercises and healthy diet. Strength training or weight lifting exercises are considered as the remedy for all the fitness related requirements. Since all the body parts get worked up in the process of lifting weights, number of lean muscles in your body surges.

Between fat and muscles, only one has the right to reside in your body. Should your body has more muscle mass, it inevitably does not have much fat. You can practice strength training with low or medium intensity dumbbells and pair them with cardio workouts for 10 to 15 minutes.

However, workouts in alienation are good for nothing. Your efforts should be inclined to keep you shielded from the temptation of delicious and unhealthy foods. These foods pile up toxins inside your body and build up tough layer of fats. Regular workouts with unhealthy diet can seldom triumph you. You better nurture the habit of relishing your adored foods by allowing you to have cheat days once in a while.