Steph Pappas is a talented American YouTuber who is best known for her self-titled YouTube channel, which has a wide range of content from fashion to vlogs to gaming and mukbang videos. She and Ashley Rivera also had a collaborated YouTube channel called Ashley Steph which quickly became popular. Steph has more than 1 million YouTube subscribers and more than 200k followers on Instagram.

In one video, she admitted that she prefers studying online.

She is managed by her brother, Nick.

She tends to highlight her hair.

Steph Pappas has either endorsed or promoted brands like MVMT.

Her self-titled YouTube channel which has a wide range of content from fashion to vlogs to gaming and mukbang videos. She began her YouTube channel in 2008 when she was just 8 years old. She has more than 2 million YouTube subscribers on her channel. 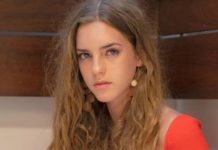