The details about Claudia’s educational qualifications are unknown.

Claudia is represented by Dulcedo Management.

She has Romanian ancestry.

Through her social media, Claudia has endorsed several brands such as – 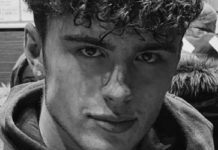