Gabrielle Union is an American actor, model, voice actor, producer, and author who is known for her television roles like playing Special Agent Sydney “Syd” Burnett in the action crime comedy series L.A.’s Finest, Mary Jane Paul in the drama series Being Mary Jane, Detective Jane Seever in the NBC crime drama series Life, Dr. Courtney Ellis in the CBS medical drama series City of Angels, Perri Reed in the ABC series Night Stalker, Tracy Monaghan in the sitcom Goode Behavior, Keesha Hamilton in the family drama series 7th Heaven, Nala (voice) in the animated series The Lion Guard, and Renee Slater in the ABC comedy-drama series Ugly Betty. Gabrielle Union has also been a part of various movies including 10 Things I Hate About You, Two Can Play That Game, Bring It On, The Brothers, Deliver Us from Eva, The Perfect Holiday, Cadillac Records, Think Like a Man Too, and Cheaper by the Dozen. 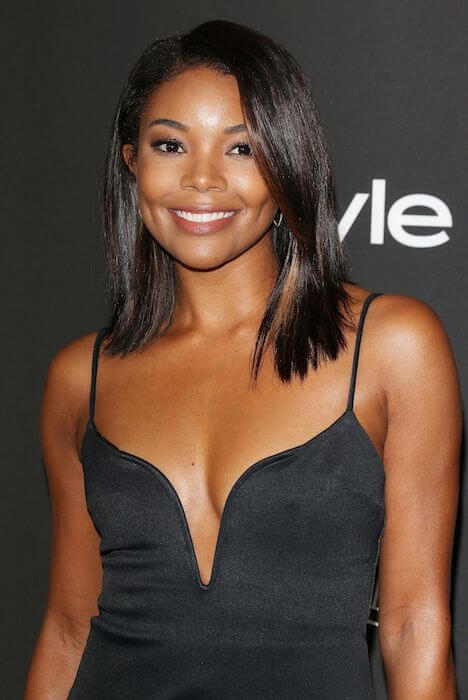 She got educated at the University of Nebraska and later shifted to Cuesta College.

Gabrielle, then went on to pursue a degree in sociology from UCLA.

During her senior year at UCLA, she pursued an internship at the Judith Fontaine Modeling & Talent Agency.

Gabrielle Union has been signed to –

Her net worth has been $40 Million according to CelebrityNetWorth.com.

Gabrielle Union is of African-American descent.

In May 2014, she appeared in a Neutrogena Sensitive Skin Solutions oil-free foaming cleanser TV commercial.

Playing a cheerleader in the 2000 movie Bring It On opposite Kirsten Dunst. She was also appreciated for her role as a doctor in the CBS TV series City of Angels in 2000.

She made her acting debut with the 1999 teen romantic comedy movie She’s All That where she played the role of Katarina “Katie” Darlingson.

Her first movie as a lead actor was the romantic comedy film Deliver Us from Eva (2003) where she appeared as Evangeline “Eva” Dandrige.

Gabrielle first appeared on television in 1993 in ABC’s sitcom Family Matters where she played the minor role of a mall girl in an episode titled “Scenes from a Mall.” Her role was uncredited.

Her next appearance was in 1995, and 1996 in NBC’s series Saved by the Bell: The New Class where she got to play the role of Hilary / Jennifer in 2 episodes.

She exercises in the presence of personal trainer Ahmad Baari. He makes her work out 90 minutes a day, which mostly includes cardio and stretching exercises. She does kickboxing as well.

When she doesn’t get much time to go to a gym, Gabrielle exercises in her trailer or at home, where she tries to do a circuit (tries to complete that in 2 minutes) which includes 20 jumping jacks, running in a place for 30 seconds, 10 push-ups, 10 sit-ups, 15 curls, and 15 squats. From where does she get her motivation to work out? Readout more from here.