Jennifer Ehle is an American actress known for playing roles in various popular movies such as The King’s Speech (2010), Zero Dark Thirty (2012), Fifty Shades of Grey (2015), A Quiet Passion (2016). She was featured in the CBS telefilm The Russell Girl in 2008. She has won many awards for her superior acting skills during her film career. She has more than 6,000 followers on her Instagram account.

Jennifer went to the Interlochen Arts Academy in Michigan. Then she attended two drama schools, namely, North Carolina School of the Arts and the Central School of Speech and Drama in London.

She has English, Romanian, and German ancestry.

She prefers to dye her hair in different colors like Auburn and Brown.

Jennifer made her theatrical film debut as Cynthia Powell in drama music film Backbeat in 1994.

She made her first TV show appearance as Calypso in the drama romance war mini-series The Camomile Lawn in 1992. 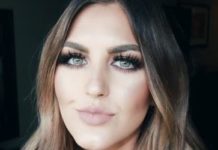