Lovely dimples, hazel eyes, Jennifer Garner is an American actress and producer. Having earned great popularity from her role of CIA officer in TV drama series, Alias, the stunning actress is best known for her roles in the movies Daredevil, 13 Going on 30, Dallas Buyers Club, and countless others. Apart from her awesome performances, her athletic body is the most remarkable attribute of her in the movies.

Possessing one of the most toned and healthy figures of Hollywood, Jennifer is married to American actor and producer, Ben Affleck. Apart from that, she is the doting mother of three charming kids. Although playing diverse roles of wife, mother, and actress is challenging, but the brunette tries her butt off to stay fit in all the roles. Her own identity is as critical to her as is the popularity and fame of her husband. The lady with immense self-esteem seldom appears on red carpet along with her hubby. She contends, to be known as someone’s wife while missing her own identity is totally unacceptable to her. 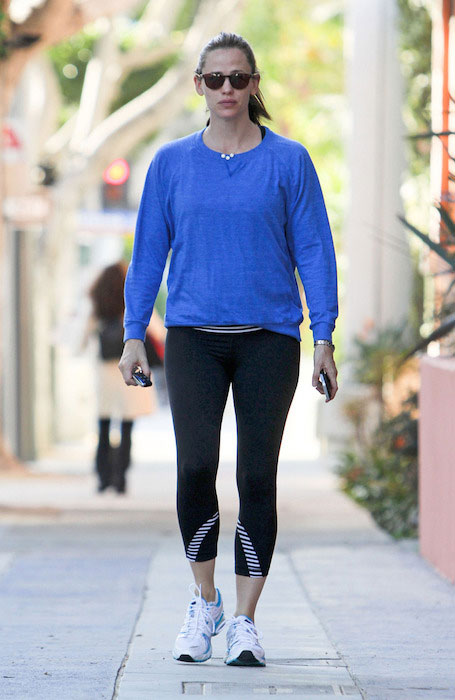 Cautious about her looks and fitness, Jennifer swears by very healthy and balanced diet regime. She nourishes her body with nutrient dense foods after every three hours. Besides, being an excellent cook also aids her in adhering to wholesome and homemade foods. She adores cooking diverse healthy meals for her and her family.

Not only does she point up the consumption of good foods, but she also stays away from processed foods. She shares, there have also been times when she has counted every single calorie consumed by her to keep her body in lean and awesome shape. Mostly, for preparing for perky and agile action roles in movies, she used to be that overly vigilant about her diet. However, she doesn’t wish to put her into that kind of roles for her responsibilities have extended and she doesn’t want to make her life chaotic by being part of such roles.

Perfectly sculpted and ripped body of Jennifer is the testimony of her devotion to workouts. The appealing actress hones her shoulder, arms, butts, and legs with exercises. Since more than fifteen years, the smashing actress has persistently been lingering on to famous celebrity trainer, Valerie Waters. Her personal trainer being aware of in and out of her body system has her do quick workouts, which swiftly amplify the number of lean muscles in her body and has her get gratifying results. Besides that, her personal trainer makes sure that she doesn’t get hurt while doing workouts.

Diversity being the key to keep one from weight loss plateau is highly favored and accentuated by her personal trainer. It was the impact of workouts only that the ravishing beauty could resume her abs even after giving birth to three children. Her workout regime normally consists of five days in a week. However, when she has to prepare herself for her roles in the movies, she doesn’t step back from extending them to six times in a week. She executes varied workouts such as yoga, Pilates, cardio exercises, strength training, lunges, push-ups, squat and press, pull downs, chest press on stability ball etc. in her workouts. Among cardio workouts, she performs walking, hiking, running etc. The busy mommy of three opts to perform various influential workouts at home itself. Doing so not only helps her tone the body but she also can better look after her kids and inculcate healthy exercise habits in them. To evade skipping of workouts, she executes her workouts in morning itself. Early morning workouts bestow her freedom to do any wishful task for the rest of the day.

Should you aspire to assist your body in dropping pounds, you should pay attention to your sleeping pattern. Little care can get you better sleep. To ensure adequate sleeping, make sure that the temperature of the room you are sleeping into is neither too high nor too low. By allowing fresh air enter your room through windows; you can help you in getting fresh air and better sleep.

Besides that, while giving utmost importance to your outfits; prefer wearing cotton and loose outfits at the time of sleeping. And if you use a pillow to support your head, prefer using memory foam pillows, for they get molded as per your shape and position. Since sleep is one of the major determining factors affecting your weight, you can speed up physiological functions taking place in your body and melt weight faster.

When you are a lone vigilante with the sole aim of avenging your family’s death, you will probably not leave any stone unturned to get fit to prepare yourself and beat the enemy. So, to fit into such a complex character, Jennifer Garner decided to up her fitness game and get in the amazing shape. Here, you can find all the details on how she worked hard and what her general approach to healthy eating is.

According to what the actress shared on Instagram sometime back, she got into the avenging woman shape by doing intense workouts. An example of her intense workout is that she spent an hour working out with Body by Simone and then moved on to a grueling session with the stunt team that lasted for 90 minutes.

It is also being reported that she included cryotherapy in conjunction with her workouts. In this method, ice baths, ice chambers or ice packs are used to relieve muscle pain, swelling or sprains.

To stay motivated and work hard, the diva watched the footage of “Canned Heat” by Jamiroquai.

The star said that doing an action flick has never appealed to her. She liked the smart script of the movie and wanted to play the character who can do anything for her kids’ sake.

Apart from hitting the gym hard for a film, the stunner has adopted good eating habits in real life. She drinks smoothies in the breakfast every day and often snacks on beet and kale chips. She is an enthusiastic cook who also makes bagels at home.

Apart from taking the help from her stunt team and Simone De La Rue for fitness, Garner also turned to Kelly LeVeque to become healthier. The wellness coach helps people to eat healthier by combining what she calls fab four – fiber, fat, protein, and greens. These foods provide your body with all the essential nutrients while shutting down hunger hormones and stopping inflammation.

Jennifer also keeps her family healthy by encouraging her kids to get involved in the farm to table process. This approach works because now, her kids can’t resist healthy vegetables like broccoli when it is growing in front of their eyes and is so fresh.

Having a Nutritionist on Speed Dial

Since taking help from Kelly LeVeque in preparation for her role in Peppermint, Jennifer has become her key client. She calls the nutritionist any time, tell her about her current routine and ask for help in maintaining a healthy diet.

To help the actress overcome late night cravings, the nutrition expert suggested her to cut back on alcohol, red wine to be precise. She also advised the stunner to have a protein-richer diet to avoid feeling hungry. Hunger hormones usually kick in when a person has a lack of sleep. So, one should get adequate sleep to avoid unwanted hunger pangs.

LeVeque also advises all her clients to balance their blood sugars by eating certain foods that shut down your hunger hormones and elongate your blood sugar curve in such a manner that the sugar levels don’t spike up too high and crash down hard later. One can easily balance the blood sugars by incorporating protein, fiber, healthy fat and greens in the diet.

Kelly also advises Jennifer to have more leafy greens and herbs as they are beautifying foods that alkalize and detoxify your body.

If you have 15 grams of fiber a day, you are quite lucky as even a big leafy green salad only has 1 gram of fiber and a cup of broccoli has just 4 grams of it. People who have ample amount of fiber in their diets feed a gut microbiome that keeps them healthy by reducing inflammation, boosting the detoxification of the body, toning up the body and helping a person to feel full.

You should focus on the gut bacteria because if it’s healthy, even eating a pizza won’t spike your blood sugar too high.

While working with Garner, Kelly’s main focus was on making tiny changes that make a big difference. She made sure that the diva cooked with healthy oils, ate healthy protein and fresh produce. The star has a garden and appreciates regenerative farming which makes Kelly’s job easier.