Joey Lawrence is an American actor, musician, singer, songwriter, record producer, voice actor, and game show host. He is known for his television roles like playing Joey Donovan in the NBC sitcom Gimme a Break!, Kurt Franklin in The WB sitcom Run of the House, Joey Russo in the NBC sitcom Blossom, Michael Brooks in the NBC drama series American Dreams, Joe Roman in the NBC sitcom Brotherly Love, Aaron Wright in the CBS action police procedural series Hawaii Five-0, Brett Mahoney in the UPN sitcom Half & Half, and Joe Longo in the sitcom Melissa & Joey. In addition to that, Joey Lawrence has also been cast in several films including Radioland Murders, Do You Wanna Know a Secret?, Chains of Gold, Trois 2: Pandora’s Box, Desperate But Not Serious, Urban Legends: Final Cut, Roe v. Wade, Money Plane, Wait till Your Mother Gets Home!, Romantic Comedy 101, Horse Sense, My Fake Fiancé, Android Apocalypse, Confessions of a Sociopathic Social Climber, and Jumping Ship.

In 1994, he graduated from Abington Friends School in Jenkintown, Pennsylvania. Subsequently, he attended the University of Southern California.

His net worth had been $250 Thousand according to CelebrityNetWorth.com.

He is of Italian descent on his father’s side and has English and Northern Irish ancestry on his mother’s side. 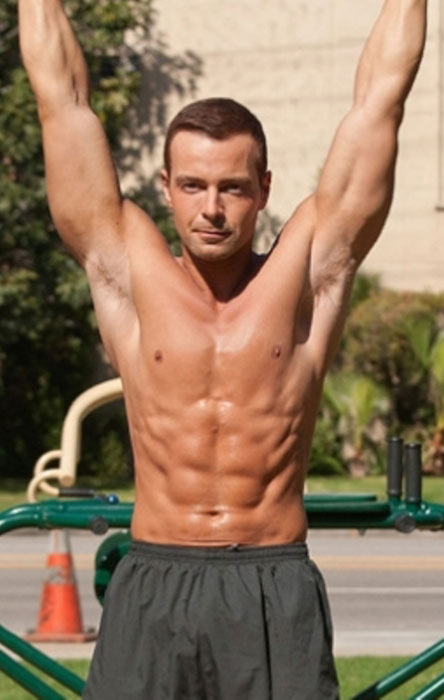 He had appeared in the Cracker Jack commercial at the age of 5. This was his first acting job indeed.

Later, he appeared in other commercials such as for Chips Ahoy, etc.

He released a self-titled (Joey Lawrence) debut album in 1993 via Impact / MCA Records. It charted at #74 on U.S. Billboard 200. It consisted of 12 singles giving it a total length of over 50 minutes.

He appeared in the 1985 comedy film Summer Rental for his role as Bobby Chester.

Before that, he had already appeared in 1982 in a short film Scamps for his role as Sparky.

In 1982, Joey appeared in NBC’s sitcom Diff’rent Strokes for his role as Joey in an episode titled “Big Brother.”

He has a chiseled body with 6 pack abs. To make such a body, one needs lots of devotion, sacrifice, and hard work.

Here is a sample workout routine, which could be followed to get a glimpse of Joey’s fitness routine.

There will be 6-90 seconds of the rest period in between the sets.

A regular workout with a clean diet (complex carbs, healthy fats, and proteins) eating at small intervals throughout the day can provide a buffed body.