Flawless beauty, The Safe Haven (2013) star, Julianne Hough is one of the celebs having incredible curves. Julianne has been doing ballet dancing since her childhood, which she reckons has tremendously assisted her in making her body lissome and marvelous.

Trimmed waist, absolutely toned stomach, and buffed butts being the most fascinating body parts of Julianne, simply make her look splendid in bikinis and other body revealing attires.

Genetically slender Julianne could be seen twenty pounds heavier to her normal weight in early 2013. She bulked up these extra pounds due to freely eating junk foods and drinking elite red wine while dating with her ex-boyfriend, Ryan Seacrest.

However, the natural blonde beauty was quite flattered with her new curves, but later when she began getting comments about her being hefty, she got really caught up with them and started working on her eating habits.

She eliminated sugar and gluten containing food items and switched to low carb, high protein, and healthy fat diet. Before long, within two weeks, she regained her same shape. Not to mention, by the time, she already had broken up with Ryan Seacrest on an amicable note. The blonde beauty has been feeling far more comforted, free, and relaxed after her split, as she has got enormous time to groom herself.

She abides by very healthy diet regime and eats everything in moderation. The gorgeous star counts on green smoothies, spinach smoothie, almonds, hummus, iced herbal tea, etc. to be consumed as snacks. She likes having vegetables both in steamed as well as roasted form. Instead of sprinkling condiments, Julianne sprays lemon juice, spoonful of vinegar, and bunch of herbal spices over veggies.

Perfectly shaped up body of Julianne is the outcome of both diet and workouts. Not being in love with conventional places of workouts such as gyms, Julianne works out all by herself. She doesn’t enjoy working out with a mentor; for he / she has you do workouts until you feel exhausted like hell.

However, she hired personal trainer only to get the know-how and correct technique of doing workouts. She practices workouts four to five days in a week for one hour. Julianne admits, the ennui of monotonous workouts being beyond her tolerance level has her execute diverse workouts.

The charming star loves doing workouts while being in competition with her girlfriends. Tracy Anderson method, SoulCycle is one of her most cherished workout. The workout is perfect blend of weight training, resistance bands and cycling. She shares, she feels dramatically rejuvenated and full of life after doing this workout.

She heavily practices cardio workouts and weight training. Credited with sexy and lean legs, she keeps exploring new ways of workouts with weights, to sculpt her legs, thighs, and arms. Besides that, she is an avid swimmer and plays different water aerobics.

Water aerobics is incredible in myriad ways. First, you don’t end up having sweat all over your body, and second, water takes enormous burden off from your body, which further shrink your chances of being injured while making tough moves. 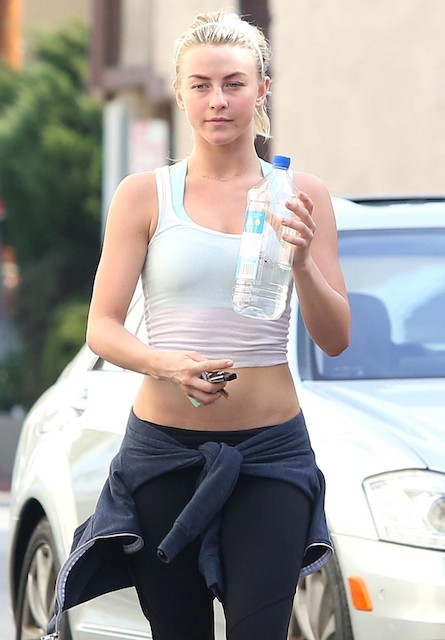 Julianne Hough recommends her fans to comprehend your body dynamics prior to embarking on any diet plan or workout regime. Your body inevitably reflects everything you feed it. So, eating wholesome foods is the only formula, which can get you svelte body. The fab star herself doesn’t torment her body by being on a diet regime, which is not in alignment with her desire.

Without nurturing guilt feelings, she does binge eating when she tremendously craves for some particular food items. And next day, she feels so fresh and lively as if she had been through some detoxifying program. Binge eating is just like clearing your brain from the obsessing thoughts of particular foods. So, don’t get mad on yourself after relishing your beloved foods. As far as workouts are concerned, Julianne is frequently out for trips. Now, you must wonder, as for how the sizzling star maintains her diet and workouts while traveling.

Well, Julianne is sincere and vigilant both about her diet and exercises. When she already knows she has to travel, she wakes up early in the morning and goes out for biking, or jogging. Workouts early in the morning can save you tremendous time for rest of the day. So, beginning your day early is not a bad idea to start with.