Kellan Lutz on How to look and Feel Spectacular all the time! 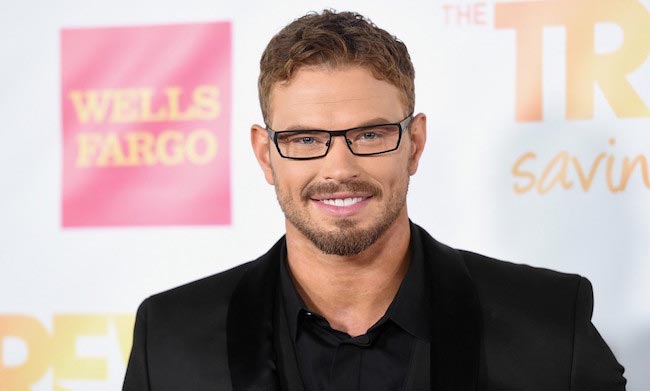 People still remember him as Emmett Cullen from The Twilight Saga. However, Kellan Lutz insists he is a lot more than a jock with big muscles. The gym might be his haven but he is also a self-proclaimed science nerd who loves inventing, holds immense compassion for charity work, enjoys traveling and is a total adrenaline junkie!!

Last seen in Extraction (2015) opposite Bruce Willis and Gina Carano; in 2016, he is set to appear in an action-adventure film, Nest, crime-thriller Money followed by an Australian sci-fi, SFv1. He intends to win an Oscar someday. But there is no rush to get there yet. He claims to look towards Matt Damon’s career for inspiration – a healthy mix of action, comedy and family drama. This model turned actor is also trying his hand at writing and would like to see himself marketing his own movie scripts in Hollywood in the near future. Seems like Kellan has his hands full, but what fuels his drive to work so hard?

Kellan claims that he feels most accomplished and successful when multi-tasking. He defends that he is not the kind of person who loses interest in his pursuits easily but simply relishes his life more when he is extremely busy. Some might define it as applied learning. Nothing makes learning more fun when you chase diversity of experience to try and apply your knowledge to a specific situation to get something done successfully.

Break your aspirations down into clear goals

Explicit objectives give your life direction. Else trying to do many things at the same time might disperse your energy in random directions that leads you nowhere. Kellan is very clear that his foremost priority is to be an action star with the ability to perform most of his stunts on his own. Hence, he takes his workouts very seriously. The rest of his interests get his attention in order of priority.

If you want it bad enough, you will find a way to manifest it.

Giving up scholarships for college education to gain a firm ground in the modeling and acting industry was scary. But it was important enough for Kellan to make it happen for him. Every blockage, every setback forces you to review your situation creatively and makes you find solutions in places where you least expected. The point is to come through and deliver.

How to conquer your personal fitness challenges?

Actors have to stay fit by default. But altering body composition does not get any easier for them considering they have very little time for themselves while filming. If a particular role sets a very high benchmark for physical aesthetics, the pressure mounts higher. We all know how miserable one tends to feel while training to look good under stress. It takes serious discipline to restrain negative emotions from taking you off-track.

Even though The Legend of Hercules (2014) fared badly at the box office, Kellan’s ripped physique in that movie still managed to get plenty of attention. While he openly elaborates upon his diet and workout style, he revealed key principles to Men’s Health that prevent him from sabotaging his regimen.

Staying fit is more a matter of sticking to principles that cultivate habits running on autopilot to work for you especially during a busy schedule. This approach alongside self-awareness to how your body responds to lifestyle changes will take you much farther than randomly replicating celebrity workouts in your routine.

Going all out hard and heavy has its time and place, when you can afford plenty of rest and sleep and the time outside your gym is not physically taxing. During a busy period that requires plenty of leg work, lifting heavy will leave your body painfully sore and make your movement awkward.

Kellan could not afford to feel anything less than his best on the movie sets of Hercules, so he stuck to light weight-high repetitions but started training each body part three times a week to compensate for lack of heavy lifting. Men’s Health came across a study that confirmed lifting mere 30% of your max lift to failure ensures greater muscle gain than lifting at 90% capacity for just a few reps.

The following workout is meant to be performed with light weights, high repetitions 3 times a week on non-consecutive days.

If you are educated about the main foods and ingredients that will serve as your primary source of fuel, sticking to a clean diet will get much easier and will take the confusion out of every meal.

While preparing for The Legend of Hercules, Kellan had to stick to a simplified high protein-Paleo diet and particularly avoided grains.

Whenever he visited a restaurant, he refused to look at the menu card to avoid a sense of deprivation that came from looking at all the choices which were off-limits. He simply requested for a salad tossed together with salmon and avocado. 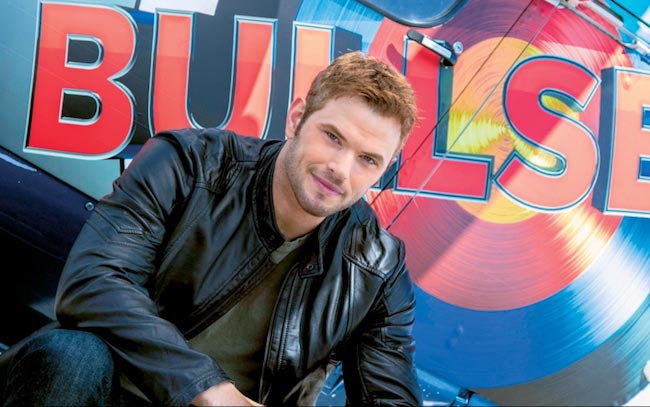 Unstable surfaces are your friends. While filming Hercules, simply staying upright while riding a horse and swinging around a heavy sword resulted in hours of inadvertent core workout for Kellan. The same impact can be replicated in the gym using TRX suspension kit, a stability ball and heavy kettlebells. In absence of the above equipment, Kellan resorts to advanced variations of push-ups that burn your core even as you build your upper body strength.

Life often gets in the way when you intend to grab a workout at the gym. On the sets of The Expendables 3 (2014), Kellan noticed Sylvester Stallone often walked around carrying a weighted bar and worked with it during off time in between scenes. Ever since, Kellan started traveling with resistance bands to ensure that a busy schedule or inaccessibility to a gym does not convert into an excuse to slack off. If staying in shape is important to you, prioritizing a workout no matter how short is always possible.

Running is the most preferred form of cardio, but it may not be for everybody. If you lack the knack or interest for running, then consider alternative ways to torch calories that engage your body and mind.

Kellan dislikes running but claims to find a happy escape in swimming. Since, a pool is not available everywhere, for greater clarity in his muscles, he crams a bodyweight exercise with a free weight move in a superset as elaborated in the above-mentioned workout.