Kelly Ripa is an American actor, dancer, talk show host, writer, voice artist, and television producer who has been the co-host of the syndicated morning talk show Live! with Kelly and Ryan in various formats. As an actor, she has played roles like Hayley Vaughan in the ABC soap opera All My Children, Faith Fairfield in the television sitcom Hope & Faith, Whitney in the ABC sitcom American Housewife, Jennifer Bradley in the comedy-drama series Ed, Coral in the drama film Marvin’s Room, Dr. Roxanne “Rocky” Ballantine (voice) in the animated superhero film Batman: Mystery of the Batwoman, Future Bonnie (voice) in the made-for-TV animated film Kim Possible: A Sitch in Time, Melody in the crime drama series 1-800-Missing, Nat’s mom (voice) in the CGI-animated 3-D science-fiction comedy film Fly Me to the Moon, and Ms. Mulwray in the teen drama series Riverdale. Moreover, Kelly Ripa was named one of the “Most Powerful People in Media” by The Hollywood Reporter in 2014.

Later, she was enrolled into Camden County College to study psychology but dropped out to focus on her acting career.

In 2020, her net worth was $120 Million according to CelebrityNetWorth.com.

She has Italian and Irish ancestry.

She is also known for co-hosting the morning talk show Live! with Regis and Kelly.

In 1996, she debuted with the drama film Marvin’s Room for her role as Coral.

As a voice artist, she made her theatrical film debut by providing vocals to the character of Mrs. McFly in the 2008 Belgian-American CGI-animated 3-D science-fiction comedy film, Fly Me to the Moon.

From 1986 to 1992, she appeared in USA Network’s dance television show Dance Party USA as a dancer.

As a voice artist, she made her TV show debut in an episode titled Family Guy Viewer Mail #1 of the adult animated sitcom, Family Guy, in February 2002.

Kelly Ripa trains her body every day. She does it with more ease now, but it wasn’t the case when she started out.

She started her routine under the guidance of Anna Kaiser of AKT in Motion. She prefers to mix her interval training workout with dance classes to burn fat fast and get in shape.

Kelly prefers to do exercises in a group rather than an individual.

You can check out her 2015 edition of workout routine and diet plan. 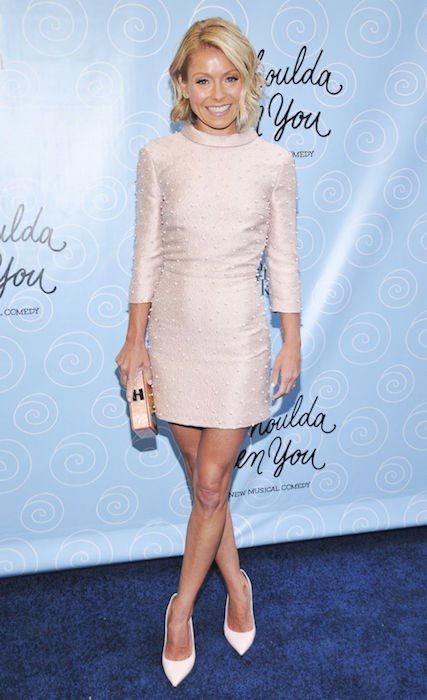