Kristen attended a performing arts school for 3 years in Canada and completed her majors in drama.

Kristen is managed by Matt Dugan.

She has Macedonian ancestry.

She often tends to dye her hair ‘blonde’, ‘pink’ and ‘purple’.

Kristen has done endorsement work for the following brands –

Kristen has not spoken about her religious beliefs publicly.

Kristen hasn’t made her theatrical film debut yet.

Kristen has not made any television show appearances yet.

Details about Kristen’s diet and workout are unknown. 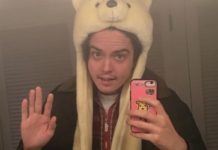