5 ft 7 in, exquisite beauty, Leona Lewis is a British singer and actress. After being through wide fluctuation in weight, the former The X Factor star is about to touch size 6. However, her weight loss journey has kind of turned off her fans who have always looked at her as an epitome of feminine figure. Due to her previous size 14, her fans loved her with her fuller body. They believe after shedding so many pounds, Lewis is left only with bones. 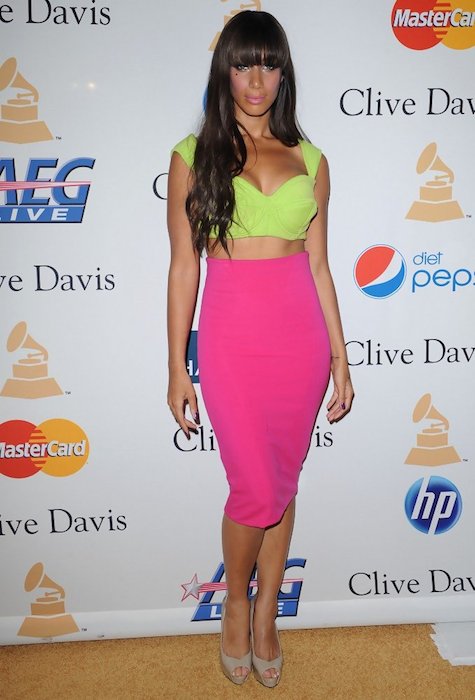 The singing sensation might not feel flattered with such ruthless comments because she has religiously worked towards losing pounds. Lewis herself admits that she has tried all kinds of weight loss plans prevalent to shed surplus pounds. In fact, she has been struggling with her weight from her teen age, when despite being size 8, she was overly concerned to melt pounds.

The hottie who has always nourished her with nutrient loaded diet also looked fascinated to join the league of skinny celebs in 2010. And before long, she submitted to one month detox plan. By the end of 2010, the stunner lost massive pounds and transformed from size 14 to size 10, which made her look more fascinating than ever. Lewis shares that she sticked to detox plan and consumed only vegetables for one month. In beverages, she consumed only water, which was not tough for her because she is accustomed to consume ample water in her routine. Leona reveals that she was not compelled by industry to lose weight. In fact, it was her own desire to see herself in slimmer body shape, which had her swear by such a strict diet program.

Despite abiding by the extremely restrictive diet plan, Lewis doesn’t point up the idea of dieting. She followed the diet program just as an experiment. Moreover, it was just matter of one month. However, she resolved not to follow any such crap in the future. Leona tells that she never wants to starve herself because she simply loves food. She also reveals her fondness for chocolates which she could not remove from her diet even while going along with the detox plan.

Lewis seems to have realized the hostile impacts of starvation diet programs on health. The sultry star shares, as you grow older, you realize that it doesn’t matter how you look unless you are healthy. And your goal gradually begins shifting from being slender to being healthy. Health being the key to all the joy and glee is reflected both by your body and face. And no matter how slim you become, you cannot cherish the blissful moments of life if your health is at stake. Lewis too doesn’t bother much about her looks now, for health is her paramount concern.

Here comes one recommendation for Lewis’ fans who aspire to have curvy figure like her.

Like Lewis, you don’t have to adhere to a crash diet program to lose weight. You can rather pick healthy and far more rewarding way and that is – consume five small meals. Research shows that people eating five small meals in a day are far slimmer and healthier than those who consume three big meals in a day. Your consumption of small meal between your breakfast and lunch naturally cut back your tendency of eating more food in lunch.

Frequent meals will hold back your body to grab any chance to bulk up calories. Not only does long starvation triggers your body to accumulate fat, your metabolism too gets slower with elongated gaps between your meals. However, since small meals keep your metabolism busy, it boosts its functioning and thus enhances your chances of getting slimmer body.