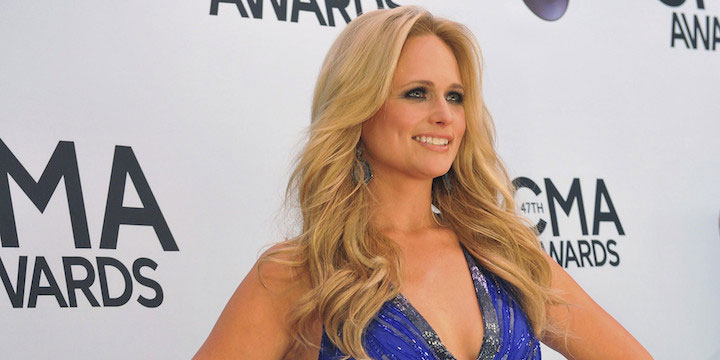 5 ft 4 in, blue-eyed, Miranda Lambert is an American country music artist. Best known for her popular albums such as Kerosene, Crazy Ex-Girlfriend, Four the Record, and Revolution, the sensational singer has won numerous Grammy awards. The blonde bombshell who has always shared on and off relationship with slender body startled us with her dramatic transformation in Nov 2013. Having shed twenty-five pounds, Lambert indeed has become an epitome of beauty and fitness.

Her slender curvy figure is simply killing. The hottie shares, she being a gala girl and least stressed about her weight in her twenties was always up for parties, junk foods, and unhealthy lifestyle. However, she didn’t want to give the same damaging start to her new age group. Having committed herself to render refreshing and healthy touch to her life prior to hitting thirty, Lambert religiously devoted herself to workouts and nutritious diet.

And before late, the determined lady imprisoned everyone’s eyes in CMA Awards, November 2013, when she stepped on the red carpet in sylphlike figure. Lambert shares, it’s really overwhelming when people value you for the hard work you perform to acquire something as big as curvaceous figure. Keen to gain bikini-embracing figure, the stunner shed massive pounds by executing cardio and making some healthy swaps in her diet. Dramatic weight loss seemed to have strengthened her nuptial bond with hubby, Blake Shelton, country music singer because he shares that his wife has grown outrageously sexier.

Having dwelled on unhealthy eating habits from such a long time, Lambert was well aware of their drastic consequences. First thing she altered after deciding to melt weight was her diet. In the beginning, she resorted to Nutrisystem Diet plan. However, since the plan failed to flatter her, she skipped the idea of abiding by any diet program and rather submitted her to healthy eating habits.

The hardcore junk food eater said goodbye to unwholesome foods and shook hands with wholesome foods such as almond, bananas, green juice, sweet potatoes, chicken etc. Besides that, she kept a check on the portion size of foods she consumed and made sure to stop eating as she felt satisfied. Some of her nutrient dense swaps she made are –

Rather than sweeping myriad food items, the stunner trimmed down their consumption. While swearing by nutrient packed foods most of the time, the gorgeous woman occasionally indulges herself in her favorite foods such as low-fat chocolate shake, low calorie mocktails etc. She adores drinking self-made mocktail / cocktail such as Crystal Light raspberry lemonade-flavor, rum, and Sprite zero. However, she is resistant to eliminate beer from her occasional beverages. To refrain from unhealthy foods, she prefers keeping them out of sight.

Despite not being in love with workouts, Lambert preferred to lose weight by sticking to exercise over plastic surgery. She refers plastic surgery ridiculous and transient solution to losing weight. Without being sluggish, she executes exercises seventy minutes in a day.

The kickass beauty performs myriad workouts under the supervision of Bill Crutchfield, her personal trainer. Her workouts include body weight exercises, circuit training, resistance-band moves etc. Among cardio workouts, she immensely relies on stair climbing, jumping jacks, walking, running, horse riding etc. Not to mention, her weight loss journey might seem stress-free to most of us, however, it was seldom easy because apart from working hard, she had to take her personal trainer everywhere with her.

Are you one of the fans of Miranda Lambert? Does her silhouette figure makes you envy her?

Well, you too can acquire slender and sculpted figure if you switch to strength training. Mostly women bank more on cardio than strength training due to varied reasons. For example, some women steer clear from them for the fear of bulking up, while some others believe that muscle formation will later get transformed into fat. However, all these myths have no ground to brace them.

Cardio training only has capability of stripping off pounds from your body, while weight lifting exercises render definition and shape to your muscles. Weight lifting crops up your efficiency of burning calories in a day because amplified muscles rev up the usage of calories you consume. And women don’t have to stress over bulging muscles because owing to fifteen to twenty percent lesser testosterone hormones they have in comparison to men, they are unlikely to face any such trouble. The workout supported with protein rich diet can do wonders on your body. And about the intensity of weight, just remember the fact, more is the intensity of weights, more are the calories you burn with fewer reps. So, what are you waiting for, buy dumbbells and get started.