Heartthrob flamboyant look, Rodrigo Santoro is a famous Brazilian actor. The actor has appeared in numerous successful movies such as Love Actually, 300, I Love You Phillip Morris, and myriad others. His latest appearance in the movie 300: Rise of an Empire in particular depicts the hard work and dedication the actor has put in the role.

Starred as Xerxes, the Persian king who considers himself as God, Rodrigo looks absolutely smashing in the movie. 6 ft 2 in tall star has been portrayed in the most chiseled and spectacular shape in the epic drama. Playing such an influential role of being equipped with the power of God certainly requires one to have superb will power, and defiant attitude to acquire such a ripped body. The handsome actor gives the credit for his captivating look in the movie to the intense workouts and restrictive diet regime he followed. It took Rodrigo steady four months of workouts and diet to have him ready for his challenging role in the movie.

Rodrigo is one of the celebs who have been living physically active life from their younger days. Since the age of seventeen, the hunk has persistently been practicing surfing. At times, when his work schedule is not very busy, he loves doing surfing and doesn’t refrain from doing it even three or four times in a day.

Well, his well-defined athletic body testifies his affection for the grueling sport requiring one to have immense strength, speed, and endurance power. However, for grooming his body for his role in the movie, 300: Rise of an Empire, water sport in alienation was insufficient. He had to attain lean and muscular body for playing the role of king. And what made things even more chaotic and daunting to him was the fact that he just had shed enormous pounds from his body for his role in the movie, The Last Stand. 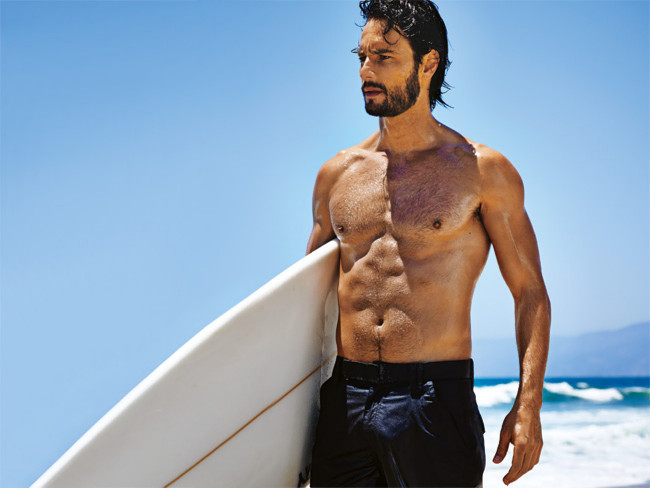 Since gaining muscle mass without adding fats to his body was seldom stress-free, he hired a personal trainer in his native country, Brazil, to train and monitor him, so he can attain swifter results without being hurt. His workout regime being extremely tough was comprised of four hours of exercises in a day. Without being slothful, Rodrigo hit gym twice in a day, two hours in the morning, and two hours in the afternoon. He practiced multiple workouts such as planks, squats, kickboxing, strength training, resistance training etc. His workouts were mainly directed to build up his core strength, rip his upper body, and give him authentic look. There were regular alterations in his workouts, mostly after a week or so.

The kick ass workouts of the dashing star went hand in hand with his diet. To make his diet support his workouts, he sworn by restrictive diet regime wherein he was not supposed to relish his adored foods. While keeping his cravings for his favored foods such as pasta, ice cream, chocolates etc. in control, he followed healthy diet regime. He inculcated copious lean protein, complex carb, and healthy fats in his diet. Although in the beginning, it was like hell for him to abide by such a diet regime, but as soon as he began noticing the influence of wholesome foods on his body, he couldn’t help being flattered.

Since hefty workouts have to be in sync with nutrient loaded diet, he consumed six to seven meals in a day. He in particular steered clear from alcoholic and sugary beverages. To satisfy his temptations, he allowed him to consume his favorite foods in moderation at most once in a week. However, fitness and sculpted body being over his body and mind didn’t have him devour junk or unwholesome foods. Not to mention, the strict diet and workout regime paid the actor quite well, since he succeeded in enthralling the audience with his commanding role in the movie.

Kettlebell workout is an incredible way of scorching pounds and extending the number of lean muscles. Thirty minutes of workouts with kettlebells followed by running on treadmill make superb amalgam of medium and high intensity workouts. Allocate your workouts in three sets while giving ten minutes to each set. Execute your preferred exercises with kettlebell and maintain gap of three minutes between kettlebell workouts and cardio workouts.

But, prior to embarking on your workouts, don’t forget to warm up your body with cardio workouts. Make a point here, while doing cardio workouts, there should be significant enhancement in your heart rate. Should you don’t realize your elevated heart rate, work on enhancing the intensity of cardio workouts. The workout technique being very beneficial will have you notice its impacts within couple of days. Without bulging, the workouts will have you acquire athletic and muscular body, which indeed is the most desired male physique adored by females.