Ripped body, killer look, model-turned-actor Sidharth Malhotra made his entry into Bollywood with his debut film, Student Of The Year. Despite being the new face, the actor has been able to captivate the hearts of tons of girls.

Bollywood actor owning chiseled body has lately been busy in grooming him for his role in his upcoming movie “The Villain.” The role seeks him to appear in the muscular body, so Sidharth is focusing on bulking up his body through strenuous workouts.

Despite having a sculpted body, Sidharth doesn’t like to flaunt his body in shirtless shoots. The actor with huge self-respect shares, he wishes to garner applause for his outstanding acting caliber, not for his superb body. Well, that’s a really nice thought Sidharth, keep it up. 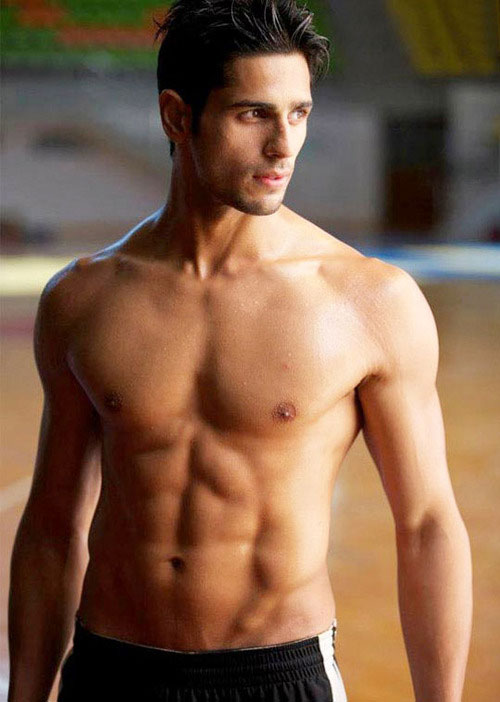 Carved body of actor indeed has been responsible to a great extent for his success. Sidharth admits the fact, it’s not easy to keep up six packs throughout the year, you really have to work hard for that.

One of the secrets behind athletic body of the star is his affection with football. Instead of doing hardcore and tough workouts in gym, he is far more in favor of playing his favorite game. Right from his childhood, the heartthrob actor has been into energetic games like football.

Besides that, Sidharth doesn’t appreciate the idea of exhausting his body beyond his endurance. That’s the reason; he cancels his normal workout sessions, when he knows intense dance has already been scheduled for him for the day.

The dazzling star bestows the credit of his articulated workouts to his personal trainer, Satish Narkar, who makes sure that his workouts don’t get stagnant. He keeps varying his set of workouts after every four weeks.

After beginning his workouts with ten minutes warm up exercises, Sidharth practices cardio workouts and weight training. The actor also adores running and swimming, and practices them twice in a week. Both the workouts are exciting way to provide exercise to your body.

Being non-vegan, the handsome dude eats bountiful chicken, fish, meat, and foods having rich content of protein. The sexy hunk drinks plenty of water to keep his body hydrated and drinks protein smoothie when he doesn’t get time to have proper meal.

Sidharth never undermines his diet and nourishes his body with nutrient loaded foods. He makes sure that calories consumed by him justify the calories burnt by him and he creates appropriate calorie deficit in his body.

While sticking to balanced diet, the actor dwells on organic and homemade foods. He confesses his taste buds are more inclined towards sweet foods. However, he maintains moderation in the consumption of sweet foods and prefers substituting them with sweet yet healthy foods. Dark chocolates possessing antioxidant properties are one of the healthy choices made by him.

Besides that, he eats numerous fruits and vegetables in his daily diet regime. Instead of having fruit juice, the actor prefers eating fresh fruits, as juices make your body devoid of the benefits of fiber. They also readily get assimilated inside your body, causing an increase in your blood sugar level.

Not only does he eat healthy, he also steers clear from the most degenerative vices such as, cigarettes and alcohol. He drinks alcohol once in a blue moon, and that too to deal with peer pressure.

Sidharth recommends his fans not to go berserk as far as workouts are concerned. Instead of opting workouts just like that, endeavor understanding your body requirements. If you are in a profession requiring you to make tremendous physical movements, you don’t need to spend much time in gym.

Contrary to that, if your day schedule is idle in office, workouts become mandatory for you. Situation varies from person to person; you cannot blindly abide by anyone’s workout or diet regime, without first matching your daily activities with theirs.

In addition to that, grueling workouts inevitably have rewarding results, but seldom do them without prior training. Sidharth himself suffered from knee injury couple of times due to practicing workouts without thorough knowledge. Once you learn the correct procedures and techniques of doing workouts, you can practice them on your own.