Nelly Furtado is a Canadian singer, songwriter, and actor who has won several accolades including a Grammy Award from 7 nominations, a Latin Grammy Award, 10 Juno Awards, a BRIT Award, a Billboard Music Award, an MTV Europe Music Award, a World Music Award, and 3 Much Music Video Awards. Her discography includes several albums and songs such as I’m Like a Bird, Turn Off the Light, Loose, Whoa, Nelly!, The Spirit Indestructible, Mi Plan, Folklore, The Ride, The Grass Is Green, Maneater, All Good Things (Come to an End), Say It Right, Manos al Aire, Waiting for the Night, Hey, Man!, No Hay Igual (ft. Calle 13), Explode, Try, Promiscuous (ft. Timbaland), Bajo Otra Luz (ft. Mala Rodríguez), and Powerless (Say What You Want). On February 28, 2014, Nelly Furtado was awarded Commander of the Order of Prince Henry in Toronto by Aníbal Cavaco Silva, the then-President of Portugal. She also has a star on Canada’s Walk of Fame. 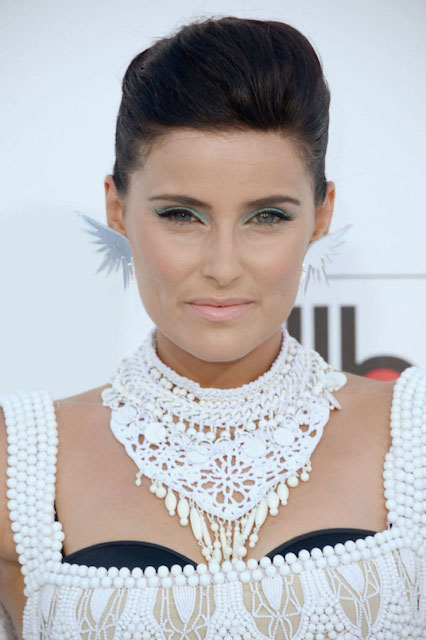 Furtado has been signed to several talent agencies –

She has Portuguese ancestry through both of her parents.

This is because of an interview given to Genre magazine in June 2006, where she showed a positive response in terms of attraction to women.

However, Nelly describes herself as “straight”.

In 2007, she appeared in a Canadian TV commercial where she promoted the “Turn Out the Light”.

The film is loosely based on a video game of the same name.

In 2001, Nelly guest appeared in The WB’s science fiction television series Roswell as herself, where she performed the single “I’m Like a Bird”.

Furtado used to hit the gym a couple of years back. She wanted to look good in her body for the photoshoots. But, now her vision has changed and she works out for herself, and not for aesthetic purposes.

She eats in the right manner and works out to make her heart (including other body parts) healthy.