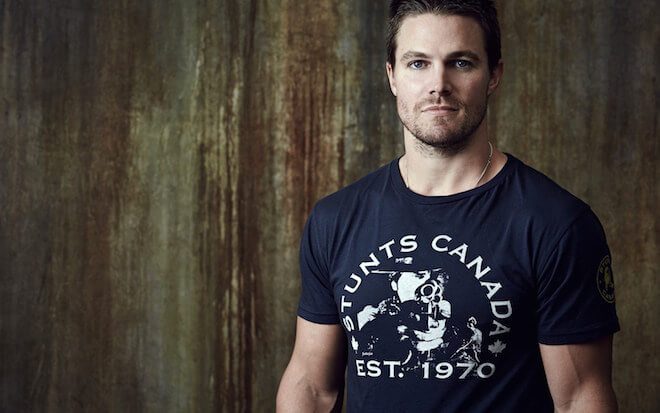 Nobody made ascending pull ups look as cool as Stephen Amell did working the salmon ladder in the first episode of Arrow. On screen, you may see him climb a rope, perform handstand push-ups, muscle ups and front levers with such amazing ease that people wonder if he can even perform them all for real! Amell blew everybody’s mind away when he admitted that it is indeed all him. When it comes to performing all the stunts, “He would do everything if we would let him,” said executive producer Andrew Kreisberg. In an interview right before the premiere, executive producer, Greg Berlanti mistakenly mentioned Stephen performs, 25 percent of the stunts on the show, not realizing that he actually executes 75 percent of the fight sequences for real, that Amell, later clarified on Twitter.

Ever since, season one of the CW series, Arrow, aired on the small screen; Amell’s fitness regime has never stopped being a matter of immense interest. Here is a glimpse of what all he can do! 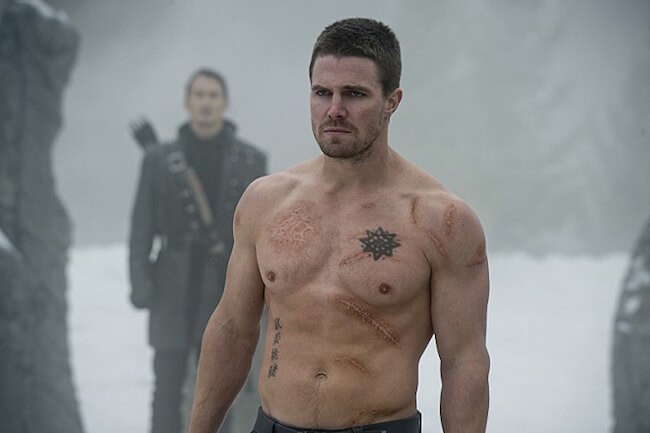 The Beginnings of Creating an Authentic Physicality

Originally, the writers of the show did not even script the character of Oliver Queen / Arrow to possess an unnaturally overt level of fitness that is now constantly associated with Stephen Amell. He even admitted that he neither took off his shirt during the auditions nor asked to build his physique according to any specifications. What spurred his radical transformation was six weeks of free time before he started shooting.

Consumed by the thought of starting a new job as a superhero and feeling the pressure to look ‘perfect’ for a potential shirtless scene, Stephen intensified his workout sessions in the gym. That may sound rather like customary preparation for typically every actor these days. What set Amell apart was that he also started taking archery lessons, picked up some generic fight moves and joined a free running academy to build a foundation in Parkour on top of it! 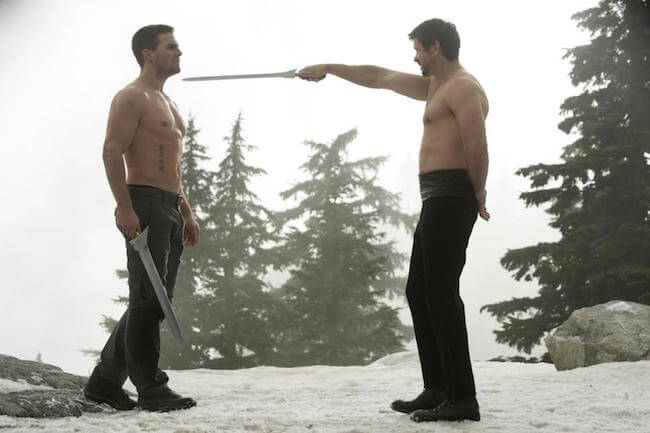 His thorough preparation helped him master a broad range of physical skills demonstrated by very few people. Stephen managed to impress the director of his show to the point that he changed the script to showcase his physical prowess and body weight control. Amell himself admits that, in retrospect, he unintentionally set an unrealistic benchmark for fitness in season one. However, he openly shares all the work and uncomfortable lessons learnt while he remodeled himself into a believable superhero.

For those, who wonder what superhero athleticism feels like, the following are just a few of the many concerns you need to keep in mind.

An Active Lifestyle Should Be For Life.

Taking a vacation from fitness should not be an option. Although, life can get unexpectedly demanding making you give up your gym membership, a daily time slot for even a short bodyweight workout will keep you on top of your game.

Stephen Amell often started his day with a few rounds of push-ups and pull-ups and went for long hikes with his dogs on weekends. While struggling to find regular paying jobs in Los Angeles, Amell took up a part time position as a spinning instructor that kept his endurance on point. When the opportunity to play Oliver Queen showed up, it did not take him very long to take his fitness to the next level. The lesson being that staying even moderately fit will enable you to see past your limitations and keep you open to tackle greater number of challenges in life.

If you intend to come close to performing complex, visually stunning movements whether on a bar or on a flat ground, then you need to start building your strength. You will need plenty of it. Without strong, developed muscles to absorb the impact of quick, explosive movements, jumping off mere five steps could land you with a knee injury!

It might be fashionable to say that functional muscle comes with compound movements only, like squats, deadlifts, pull-ups and push-ups. However, isolation movements have their place to build up the strength of a lagging body part quickly and are likely to help you master a difficult movement much faster.

So What is the Least You can Do To Get Started?

Start lifting 3 to 4 times a week. As much as Stephen Amell claims to hate lifting weights and training each body part separately, that is the first place where he restarts his training, particularly after a long hiatus from the gym. Here is Stephen Amell tackling conventional compound exercises and not in the least bit hesitant to go all out heavy! 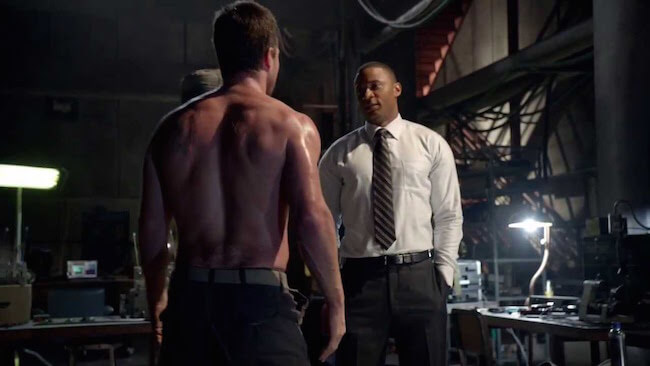 Sound Upper Body Strength is What Separates the Boys From Men.

Push-ups and pull-ups set the foundation for nearly every other upper body move. If you cannot perform these movements with ease, you may never get around to graduating to anything else even remotely more complex. It may take mere weeks for a lean person to master these exercises to months or even beyond a year for those who have considerable body fat to lose. Just keep on at it. Hanging from a bar regularly will favor you with formidable grip strength as well!

Fitness becomes fulfilling only if you gently keep pushing your limits. Most people find exercise boring because they do not train for a specific goal and entrap themselves in a boring cycle of repetitive workouts. Obsessing over a number on the scale is also never enough. Train with intention to master a specific movement or series of movements of the same difficulty level.

Amell claims to enjoy running to lose fat and has a clear preference for body weight training. Rather than simply adding on the number of repetitions for fundamental exercises, he broadens his skill range by scaling up to advanced versions of pull-ups, push-ups, balancing exercises and planks. The following wall push-up is just one of the many innovative combinations of an advanced plank and a plyometric push-up that revs up intensity without any equipment.

“The most impressive things I can do on the show is when I can manipulate my own body weight. And that really is the true test of strength.”

Skill Range Over Appearance: Think Twice about What All You can Do versus How You Look.

Most people get into exercise because they want to look like a certain way. Unfortunately, this is also one of the fastest routes to generating physical imbalances. Men who are obsessed with filling into their shirts might keep training their chest and arms to the exclusion of almost all other body parts. Women who worry about toning their legs completely ignore their upper body.

Getting a trainer to re-examine your workouts in terms of a balanced variety of pushing, pulling, core balance, steady state cardio and short bursts of intensity will build a more symmetrical body that can withstand the ravages of time. It will also have a greater carry over to real life in physically demanding situations. 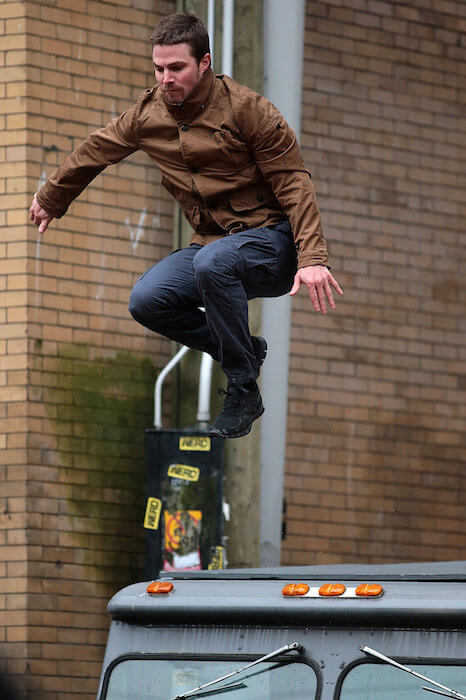 Free Running Fantasy: Can Anybody Get Around to Learning Parkour?

As fascinating it is to watch a person effortlessly leap over walls, few people are aware of the obsessive, consistent and meticulous training that goes into developing any skill.

Stephen Amell, however, had no background in Gymnastics or Parkour before he started shooting for the show. A decent foundation in strength is good enough to enroll yourself at a free-running academy. If that is not an option, but you would still like the agility and reflexes of a free runner, add the following movements to your usual gym workouts to get started.

No Transformation is Complete Without Cleaning Up Your Nutrition.

Amell had to give up processed sugar, gluten, beer and dairy to reach his full potential in terms of strength. Not having completely thought things through to replace the foods that he eliminated, he found himself starving for the first two weeks of his diet that also ensnared him into the negative ‘binge and purge’ cycle of restrictive diets and long workouts followed by mindless eating and no workouts once the shooting got over.

Having developed a greater understanding of enjoyable yet healthy foods now, Stephen Amell swears by the mental benefits of giving your best to stay in prime condition despite balancing a family life and fourteen-hour work days alongside.

Amell has actually taken up Archery as a hobby in real life. He even intends to get into archery competitions to see how good he can get.

“You have to relax when you are shooting an arrow. You can’t be tense. I’ve been able to take that into other aspects of my life, including acting.”

Now, consider what would you like to do to get your mind still and centered? After all, how can anybody ever feel like a superhero without laser sharp focus!

Enjoy the following Stephen Amell’s training montage that displays all the free running skills he has picked up and get inspired.